Hereon is part of the Microbiomes expedition, which improves the analysis of small “inhabitants” of the sea

Researchers on board the sailing schooner Tara are collecting data on the smallest organisms in the oceans in order to better understand their role in our climate. Tara has been the mother ship of the Microbiomes mission since December 2020 and was launched five years after the Paris Climate Agreement. The goal of the international team: to better understand marine ecosystems by studying the most fundamental structure of the ocean: the microbiome – the totality of microorganisms in the ocean. The researchers are particularly interested in how these ecosystems function in the context of global climate change. Dr. Paulo Calil of the Helmholtz-Zentrum Hereon will analyze and evaluate the collected data. 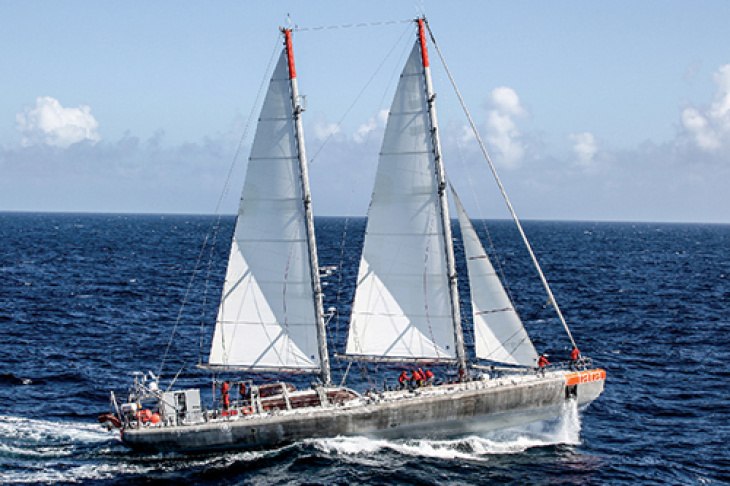 Generating knowledge with a sailing ship: The crew of the Tara collects data. Photo: Francis Latreille

Excitement and anticipation. For scientists, especially from marine and coastal research, an expedition is a vital phase of their work. This is particularly true when they are not on board. "Space on the sailing ship is limited. For me, being involved from afar is at the same time exciting and challenging as there needs to be a great deal of organization and coordination with the team onboard. After all, this mission can take us on completely new tracks," says Dr. Paulo Calil, researcher at the Institute of Coastal Ocean Dynamics at the Helmholtz-Zentrum Hereon.

Together with Hereon colleagues Martina Heineke, Thomas Kock and Jochen Horstmann, their task as part of the expedition Microbiomes, which is part of the EU funded Atlanteco Project: Evaluate the data collected by Hereon’s towed instrument array (TIA) which was sent to Martinique and will be used on the Tara boat and send their analysis back to the team onboard and researchers around the world. It's a huge amount of data. The tow chain used in the mission, developed by Hereon and Sea and Sun Technologies, comes from Geesthacht. Surface drifters, also developed at Hereon, will be deployed along the way in order to understand how surface currents modulate the microbiome. "Microorganisms play an essential role in the ocean and account for more than two-thirds of marine biomass," Calil says. They are the first link in a vast food web that feeds much of humanity, he said. By definition, the ocean microbiome refers to all marine microorganisms such as viruses, bacteria, microalgae, protists, but also their interactions with the environment. In totality, it is like a living being in its own right. Microscopic organisms also bind atmospheric carbon dioxide to an immense extent and produce oxygen in return. But precisely because it appears so inconspicuous, the function of this "climate machine" has been little researched. And so is how climate change affects them.

On strong waves with a lot of technology

The mission, which is being planned and implemented by the Tara Ocean Foundation and its numerous scientific partners, involves 42 research institutions from all over the world. The large scientific expedition started from its home port in Lorient, France. As a sailing laboratory, Tara will cover a total of 70,000 kilometers in the South Atlantic, along the South American and African coasts to Antarctica. Calil's part began on Aug 9, when the Tara set sail from Martinique. From there, she will sail to Belém, where in Brazil the Amazon River flows into the Atlantic.

The estuary region, where large amounts of fresh water flow into the sea, and also the Amazon River itself will be part of the investigations. The TIA will temperature, salinity, oxygen and fluorescence, at various depths up to five meters. This detailed information is unprecedented in the region and will help scientists understand the role played by eddies, fronts and filaments on the distribution of freshwater from the Amazon river in the Tropical Atlantic ocean and its interaction with the North Brazil Current rings In addition, satellite data will be analyzed to help researchers select specific stations for a detailed study on numerous microorganisms and their occurrence.

Aboard Tara, researchers will collect the marine microbiome for DNA sequencing . "With this data, hopefully we can better understand the functioning of the marine ecosystem as well as its resilience under climate change," says Calil.

Beyond the scientific questions, the Tara Ocean Foundation will use its mission to educate. For example, school classes will be welcomed aboard to promote understanding of the ocean. During some of the 23 planned stops, teams will share their knowledge with local researchers. From processing to managing and analyzing the data - to using the results in the field.