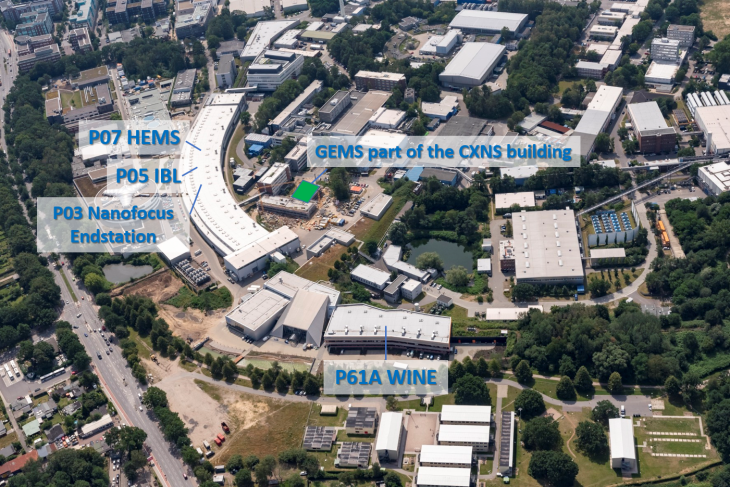 GEMS currently participates in the operation of four beamlines at PETRA III synchrotron storage ring at DESY. The High Energy Material Science Beamline (HEMS) and the Imaging Beamline (IBL) are optimized for material science applications forming a unique research cluster. Due to the complementarity in their energy ranges and beam properties, the beamlines provide facilities for a large range of diffraction and imaging experiments to a widespread user community. GEMS participates also in the operation of the BioSAXS beamline of EMBL at PETRA III and can hence offer also a characterization method for the study of nanostructured materials. The variety of available techniques is completed by the scattering methods available at the Nanofocus endstation, which Hereon operates in collaboration with DESY and Kiel University at DESY beamline P03.

The High Energy Materials Science Beamline HEMS at PETRA III satisfies high energy x-ray diffraction (XRD) and imaging techniques. It is tunable in the range 30 to 200 keV, and it is optimized for micrometer focusing with Compound Refractive Lenses (CRLs).

The materials science and general physics activities are threefold:

1) Fundamental research encompasses metallurgy, physics, chemistry, biology etc. which are more and more merging. Experiments had been done for the investigation of the relation between macroscopic and micro-structural properties of polycrystalline materials, grain-grain-interactions, recrystallisation processes, the development of new & smart materials or processes, and in situ catalysis mechanisms. Generally, all kinds of matter can be studied with high precision, high stability and low background: surfaces, interfaces, bulk single crystals, powders as well as amorphous materials in a large reciprocal space. Optics for the study of liquid surfaces are also available.

3) Experiments targeting the industrial user community are based on well established techniques with standardised evaluation, allowing "full service" measurements. Environments for strain mapping on large structural components up to 1 t will be provided as well as automated investigations of large sample numbers, e.g. tomography and texture determination.

After a first workshop in June 2006 in order to address the future user community and a second workshop in November 2007 in order to optimize the optics concept, the final design for the beamline (P07 in sector 5 of the PETRA III Max von Laue Hall, 47c), consists of a five meter in-vacuum undulator source (U19-5) - currently a standard PETRA undulator is installed till delivery of U19-5 (foreseen in 2016 some time after the extension shutdown), the main optics hutch OH1, an in-house test facility (EH1) (Hereon) and three independent experimental hutches EH2 (DESY), EH3 and EH4 (Hereon) working alternatively, plus additional focussing optics hutches OH2 (DESY) and OH3 (Hereon) with set-up and storage space for long-term experiments.

Since June 2011 the experimental hutches EH2 with OH2 and EH3 with OH3 had been available for reviewed user experiments. EH4 with its micro-tomography set-up was commissioned in 2012 (absorption) and 2013 (phase contrast), its mapper set-up in the second half of 2013. The Test Facility EH1 is not available for external users. HEMS at DESY

The development of new materials highly demands the study of their three dimensional inner structures. Thus, in particular tomographic evaluation methods gain more and more importance in the materials characterization field. Characteristic length scales, which influence the structural properties, are often in the range of some micrometers down to a few nanometers.

Due to the extraordinary high brilliance of the new storage ring PETRA III, the extremely low emittance of 1 nmrad and the high fraction of coherent photons even in the hard X-ray range an extremely intense and sharply focused X-ray light is provided.

Therefore, the Helmholtz-Zentrum Hereon takes active part in the PETRA III project by operating and funding the Imaging Beam Line (IBL). This beamline is optimized for micro and nano tomography applications.

Research at the Beamline for White Beam Engineering Materials Science WINE - P61A will focus on engineering materials science. The structure-properties relationship in technically relevant materials will be studied. In-situ experiments for investigations of materials and processes will be designed and built together with internal and external partners. Examples are: 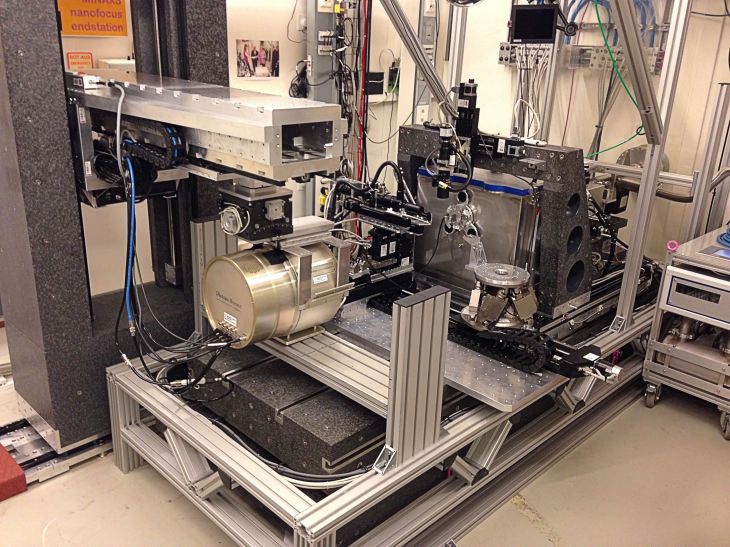 Scanning X-ray nanodiffraction (SXND) is an excellent tool for materials science. It provides structural information with sub-µm resolution from crystalline and semi-crystalline materials (e.g. metals, biomaterials, synthetic compounds). That way grain orientation, residual stress profiles, crystal structure or texture can be obtained in a nondestructive analysis. The Nanofocus Endstation of P03 (MINAXS) provides conditions for SXND even in extended in situ sample environments, due to the long focal distance of the used X-ray optics and the high X-ray energy that is available at the beamline. The nanofocus endstation started operation end of 2010 and steeply increased on user dedicated beam time since, reflecting a high operational efficiency despite the competitive mode of beam time distribution between the two P03 endstations. The beamline P03 and the microfocus endstation of it are operated by DESY (beamline manager Stephan Roth) while the Nanofocus endstation, constructed within a BMBF-funded project by Kiel University, is now operated by Helmholtz-Zentrum Hereon in cooperation with Kiel University and DESY.

A nanobeam with a size of typically 350 x 250 nm2 is generated using a nanofocusing mirror system with a large focal length of 10 cm. New techniques, using this capacity, are constantly being developed at P03 with a strong focus on material science in order to promote the use of SXND in materials science. 2D X-ray waveguide based focusing is also available for smaller beams. The endstation offers a beam size of 250 nm and an energy in the range 8 - 23 keV.

A clear working distance of 8 cm provides an excellent setting for materials science because it accepts extended in situ sample environments. Experiments at the endstation have used constructions to control for pressure, E/B fields, temperature, fluid shear, tension or indentation force in situ in nanodiffraction experiments. Sample alignment is eased by up to three video microscopes and precision of up to 10 nm for positioning the sample is possible on a set of hexapods.