DANUBIUS-RI (Research Infrastructure) is a long-term, interdisciplinary and distributed environmental research infrastructure for advanced studies on River-Sea Systems. The infrastructure enables researchers to study rivers, their estuaries, deltas and lagoons, as well as their adjacent coastal seas. The aim is to enhance the process and system understanding in order to address current and emerging challenges, to facilitate a sustainable management and to maintain the ecosystem services in River-Sea Systems.

DANUBIUS-RI is currently being set up across Europe with partners from 16 countries. The mission is to enable integrated research along the river-sea continuum by providing state-of-the-art facilities, methods and technologies.

In 2016, DANUBIUS-RI has been included in the roadmap of the European Strategy Forum for Research Infrastructures (ESFRI). In the preparatory phase project DANUBIUS-PP, the scientific, legal and financial basis has been developed to implement DANUBIUS-RI. We have led the development of DANUBIUS-RI’s Science and Innovation Agenda and we coordinate the regional case study “Elbe-North Sea Supersite”.

Setting up a research platform in Tesperdude at river Elbe(FOPLATES) 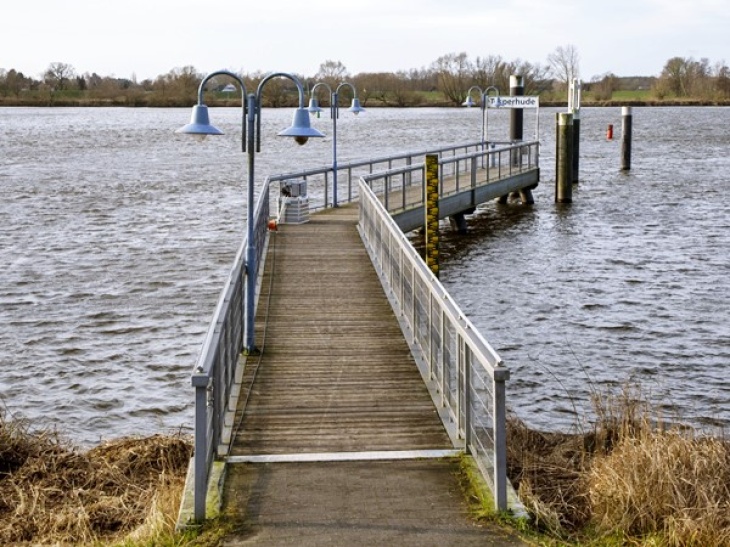 In the Elbe river massive phytoplankton blooms develop each year. However, these blooms collapse in the Port of Hamburg due to a combination of different factors, which leads to an oxygen minimum zone. This example shows how important it is to quantify and qualify the import of matter into the Elbe estuary.

Therefore a floating research platform in Tesperhude at river Elbe will be set up about 8 km upstream of the weir in Geesthacht, thus the beginning of the estuary. The research platform consists of a swimming ponton system, which follows the water level along two piles, and a container with diverse measurement systems. These provide continuous data regarding various dissolved and particulate matter (e.g. nutrients, pollutants, suspended matter, phytoplankton).

Effects of bottom trawling in the North Sea (MGF-Nordsee)

There are three marine protected areas in the German Bight: “Sylter Außenriff”, “Borkum Riffgrund” and “Doggerbank”. In the near future, bottom trawling will be excluded from large parts of these areas, which is affecting sediments, benthic organisms and fishes. In this project, we work together with partners from AWI, ICBM, Thünen-Institute, Senckenberg and HIFMB in order to prepare the monitoring of effects once the bottom trawling has been excluded from these areas.

Therefore, we assess the current status as a reference, and we develop new methods to assess the effects once the bottom trawling has been excluded. We focus on quantifying the benthic-pelagic coupling within the marine protected areas and the benthic turnover of matter including diffusive and advective processes, as well as the ones mediated by macrozoobenthos.

The arctic is among the most rapidly changing environments in the world including a massive melting of glaciers and sea ice due to global warming. The purpose of the EISPAC project is to evaluate whether ice-associated pollutants affect the functioning of these ecosystems in relation to the behaviour of key nutrients. The aim is to determine if and how the magnitude and timing of exposure to pollutants is affecting ice-associated organisms and the lower marine food web relative to the timing and availability of key nutrients. Therefore, the fate and behaviour of pollutants and nutrients are determined in water, snow and air during field campaigns in the Arctic.

A case study has been done for example in the Lena Delta in Northeast Siberia. Additionally, experiments are done in an Air-Sea-Ice Chamber at the University of Norwich, which enables researchers to study the common behaviour of pollutants and nutrients in water, ice and air under controlled conditions. This allows computer models to predict the effects of these changes on, for example, surface ocean productivity, species distributions and food webs.

The EISPAC project is part of the research programme “Changing Arctic Ocean” funded by the British Natural Environment Research Council and the German Federal Ministry of Education and Research.

Fingerprints of megacities: Investigation of nutrient dispersal in the Bohai and Yellow Sea (FINGBOYEL)

The rapid urbanisation in China led to a development of megacities in the Chinese coastal zone, which leads to high anthropogenic pressures on the adjacent coastal seas. In this part of the project, we investigate how nutrients are dispersed and regenerated in the Bohai and Northern Yellow Sea. The aim of this project is to elucidate whether the high nutrient loads in the coastal ocean can be attributed to river loads, internal recycling or atmospheric deposition.

Therefore the aim of the PROBENT project is to quantify and predict the dynamic interactions between benthic communities, biogeochemical cycling and sediment transport. The study is based on a unique compilation of various long-term data (up to 60 years) covering the German North Sea. By analysing this big dataset and applying hydrodynamic-morphodynamic-ecosystem modelling, we aim to learn from the past, model the present and predict the future.

Eutrophication of the Wadden Sea

The Wadden Sea is the largest coherent tidal flat area in the world and is a UNESCO World Heritage Site since 2019. It is a geologically young and very dynamic area, which is constantly reshaped by the tides. It provides a home for many plants and animals, as well as a resting place for millions of migratory birds.

Like in many other densely populated coastal areas, the human impacts is large. One example is eutrophication, which is driven by a surplus of nutrients transported via rivers and the atmosphere into the Wadden Sea. There it leads to massive algae blooms and the decline of seagrass. Measures have initiated a slow but constant decline in riverine nutrient loads. An analysis of long-term data showed that the ecological status has been improved – there are less algae blooms and a lower turnover of nutrients. However, regional differences in eutrophication levels exist. Along the Dutch and Eastfrisian Wadden Sea, more organic matter is imported from the North Sea than along the Northfrisian Wadden Sea. There, less eutrophication leads to seagrass recovery.

We use this basic understanding of Wadden Sea biogeochemistry for dedicated investigations of the exchange processes between the North Sea and the Wadden Sea.

The work of this research group was focused on nitrogen, an essential macronutrient that can lead to widespread eutrophication phenomena. We investigated a suite of topics, ranging from the impact of atmospheric deposition on coastal and terrestrial nitrogen inputs to aquatic nutrient regeneration.

Using stable nitrogen isotopes, we investigated the interplay of nitrate regeneration to denitrification in sediments and in the water column of estuarine systems. Nitrogen isotopes are an effective tool to unravel sources and sinks of nitrogen in complex aquatic systems, because they can shed light on turnover beyond its net effect on nutrient loads.

We found – in agreement with model results - that atmospheric deposition is an important source of reactive nitrogen, especially in coastal regions. A recent shift in fossil fuel combustion technology is mirrored in changes in N-isotopes. Moreover, we investigated the estuarine filter function for nitrogen, both in natural environments and in culture experiments. Our data show that nitrate regeneration in estuaries can double estuarine nitrate loads, e.g. in the river Elbe, and that an effective pollution management has to include turnover processes and nutrient sources on the catchment scale.