New theory on the movement of phytoplankton could imply that oceans absorb more CO2 by 2100 instead of less.

Phytoplankton need light and nutrients to grow. The microscopic algae rarely find both at the same time in sufficient quantities in the ocean. In the upper water layers, they usually lack nutrients, and further down, they lack light. A new study led by the Helmholtz-Zentrum Hereon now says: Phytoplankton can migrate back and forth between deeper layers and the water surface. If this were confirmed, it would have enormous consequences for the calculations of the natural carbon pump and thus for current calculations of the carbon budget. The study's results were published today in the journal Nature Climate Change.

Seas and the ocean are one of our largest carbon sinks. Every year, they absorb around 30 per cent of the CO2 produced by humans and thereby remove it from the atmosphere. This is mainly thanks to phytoplankton. With the help of light and nutrients, these microscopic plants take up the carbon dioxide and release oxygen. Until now, researchers assume that phytoplankton hardly move by themselves, but are driven along by currents. A study led by the Helmholtz-Zentrum Hereon now presents arguments that question this assumption. 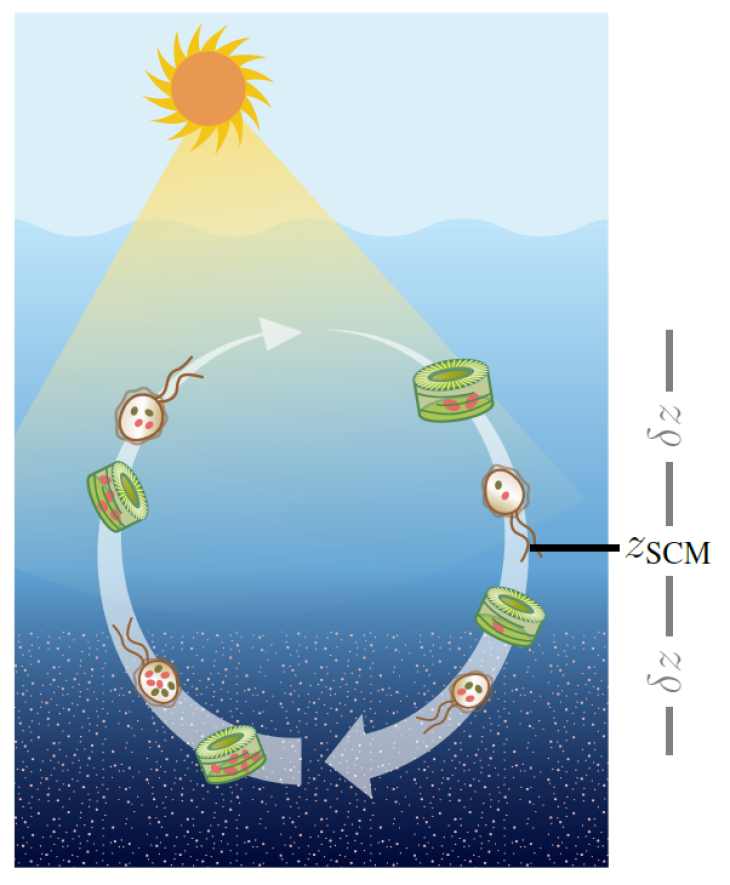 For this publication, which also involves GEOMAR Helmholtz Centre for Ocean Research Kiel and the Earth SURFACE System Research Center, the team of authors analysed numerous empirical research results. The conclusion: the measured data cannot be explained by the passive movement of phytoplankton. On this basis, the scientists developed a new model that includes the vertical migration of phytoplankton and can thus calculate the active "pumping up" of nutrients.

"Previous models treat phytoplankton as passive particles, while a lot of evidence suggests that it actively migrates to take up carbon in upper layers via photosynthesis and to store nutrients in lower layers," says Kai Wirtz, lead author of the study and ecosystem modeller at the Hereon Institute of Coastal Systems - Analysis and Modelling.

The upper water layers of the seas and oceans almost always lack nutrients. Besides light, nutrients are vital for phytoplankton. Yet despite demonstrably lower nutrient concentrations, high rates of net primary production are measured there. The net primary production is the biomass produced by phytoplankton, which forms the basis of the marine food web. Other studies have been able to detect nitrogen from deeper water layers in phytoplankton near the water surface. Also phytoplankton traits, which have evolved over millions of years, also suggest more active migrations: At least two thirds of all species have been shown to be able to move actively. What is this capability good for, if the microorganisms are only passively drifting with currents? The new study now presents this theory: phytoplankton actively move vertically between the upper and deeper water layers. This is how they get both - light in the upper layers and nutrients from greater water depth.

A constant up and down

The team around Kai Wirtz explains that although phytoplankton often swims or sinks only a few metres per day, it is able to bridge a depth of about 10 to 80 metres with the "energy reserve" from photosynthesis in the light-rich surface water. In greater water depth it can absorb enough nutrients until it actively moves towards the water surface again. This movement cycle would correspond to an active carbon pump that works much more efficiently than previously assumed.
"Based on our model calculations, we assume that current estimates of oceanic carbon uptake must be substantially corrected upwards," says Wirtz.

Jan Taucher, co-author of the study says: "There have been individual case studies in the past that showed that some phytoplankton species can actively migrate vertically and thus also transport nutrients and carbon. The combination of observational data used in the new ecological model for our current study demonstrates that this phenomenon is far more widespread than previously thought. Our results suggest that previous calculations may have underestimated marine productivity and carbon uptake."

60 times the carbon emissions of Germany

Currently, there is no technology that can empirically test the theory directly at the microscopic level of organisms. But it could be worthwhile to initiate further research. If the vertical migration of phytoplankton proves to be true, this would mean that the oceans would absorb much more CO2 than currently assumed, even with rising air and water temperatures in the future. According to the calculations of the team of authors, which also includes Moritz Mathis from the Helmholtz-Zentrum Hereon and Lan Smith from the Earth SURFACE System Research Center, by 2100 about 40 gigatonnes more CO2 per year would be absorbed than current climate models predict. This corresponds to sixty times the carbon emissions of Germany and thus roughly 10 per cent of our carbon budget. That would significantly adjust the world's climate account upwards. For this, however, it is necessary to know about essential processes, including the behavioural patterns of microorganisms. The verification of the new study's theory could make a decisive contribution to this.