Several studies have already shown: Concentrations of typical air pollutants such as nitrogen oxides and particulate matter have decreased worldwide during corona-related lockdowns. Scientists at the Helmholtz-Zentrum Hereon have now calculated in a comprehensive study for whole Central Europe how strong this effect was during the first lockdowns and to what extent the weather conditions were responsible for the better air. One result: the amount of nitrogen oxides fell by more than half in some cases due to the lockdown. The work has now been published in the scientific journal Atmospheric Chemistry and Physics. 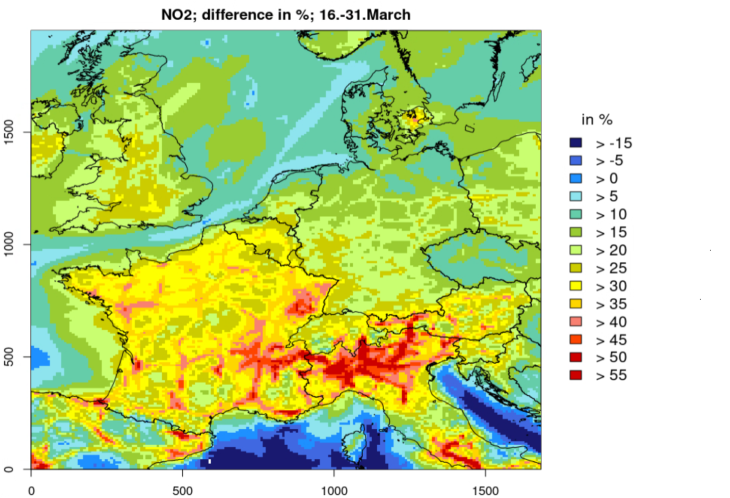 Corona has indirectly ensured better air. During the year 2020, researchers actually measured a decline in pollutant concentrations in the air worldwide. What do these values actually look like for Central Europe? And to what extent was the lockdown really the cause - and not weather conditions? Scientists at Helmholtz-Zentrum Hereon have been working on these questions. The team led by Dr. Volker Matthias focused on nitrogen oxides (NOx), particulate matter and ozone.

First, the scientists looked at concrete data from 13 measuring stations in seven countries, such as the Sternschanze in Hamburg. Since the first lockdown went from March to May (exact dates vary to some extent in different European countries), they looked at data from January to June for the years 2015 to 2020. For their calculations, they also included the respective weather conditions in their model simulations. After all, the less it rains, the worse the air. "During longer dry periods, pollutants can accumulate better in the air. A lot of precipitation literally washes the air clean," says Volker Matthias, head of the Chemistry Transport Modeling Department at Hereon's Institute for Coastal Environmental Chemistry and first author of the study.

Comparison with the past five years

It turns out that "February 2020 was extremely wet, with relatively low pollutant concentrations. The following March and especially April were quite dry, which normally leads to an increase in concentrations. But since we saw less nitrogen oxides here as well, the cause must be different," explains co-author Ronny Badeke, a PhD student in chemical transport modeling.

In principle, various sources come into question for the emissions. That's why the researchers looked at different sectors in their study: industry, road transport, air transport, ocean shipping, power generation and building heating, among others. This is because the lockdown was shown to have a major impact on some sectors, such as road and air transport. 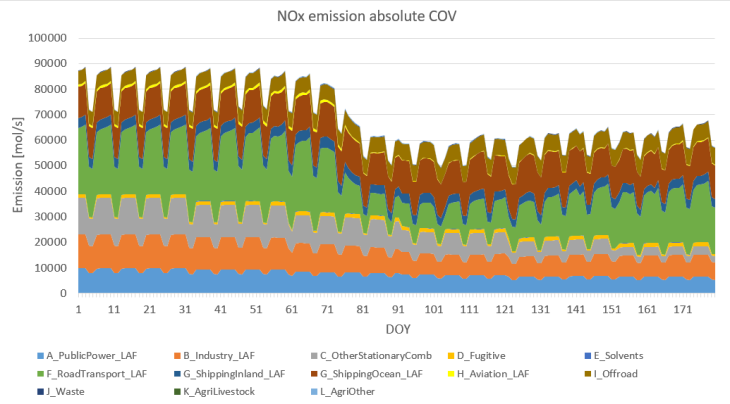 In this graph, the total NOx emissions are shown in daily resolution (Days of Year - DOY) since the the beginning of the year. It can easily be seen that the overall amount of emissions dropped sharply when the first lockdowns were declared in Central Europe (starting approximately on day 71, March 11 2020). A look at the individual sectors shows that they have a different impact: Road transport (green) has gone down drastically; shipping (brown) has hardly changed. Aviation (yellow) has decreased compared to before the lockdowns, but it has only a small impact on the total emissions. Graphic: Volker Matthias et. al

Calculations with and without lockdown

The team then ran the simulation once with and once without lockdown influences. Other weather conditions, such as those experienced in previous years, were also included. "In comparison, we see that in France and Italy, for example, where the lockdown was implemented much more strictly than in Germany, we have reductions in nitrogen oxide concentrations of up to 55 percent. In Germany, the difference is up to 20 percent. Because we have taken a very high-resolution model, we can map differences between urban and rural areas, but also shipping routes and major roads well. In Mecklenburg-Western Pomerania, which is very quiet and not very populous in terms of traffic, the effect can only be seen at 5 to 10 percent," says Volker Matthias. Here, however, the weather conditions in April also contribute significantly to the low pollutant concentrations. The prevailing northeasterly winds brought very clean air to northern Germany. Volker Matthias explains: "This led especially for particulate matter to very low concentrations. The lockdown had only a minor influence on this."

The study shows how sharply nitrogen dioxide concentrations would fall, especially in cities, if road traffic emissions were reduced - and if significantly more people were allowed to continue working from home. However, other pollutants such as ozone and particulate matter depend so much on weather that long-term changes due to climate change could play a bigger role than changes in emissions from traffic.