With innovative experiments, researchers at the Helmholtz-Zentrums Geesthacht and the Technical University Hamburg unravel why tiny metallic structures are extremely strong

With innovative experiments, researchers at the Helmholtz-Zentrums Geesthacht and the Technical University Hamburg unravel why tiny metallic structures are extremely strong 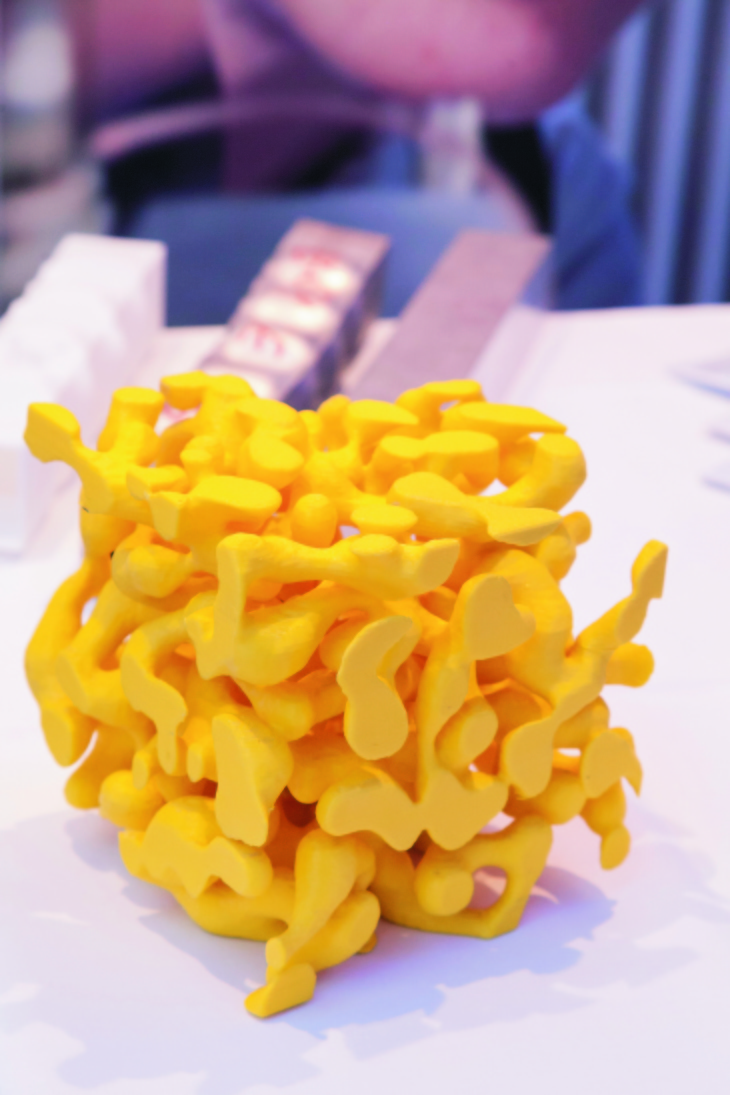 Light-weight and simultaneously strong – porous metallic nanomaterials promise interesting applications as, for instance, for future aeroplanes with enhanced reliability and for energy-efficient automobiles. The origin of the exceptional properties of the tiny metallic bodies remains to be understood in detail. Using innovative experimental approaches, researchers at HelmholtzCentre Geesthacht (HZG) and Hamburg University of Technology (TUHH) have found what makes the nanostructures so strong. Their findings have been published in two renowned scientific journals – in "Nano Letters" and currently in "Nature Communications". The results could promote the development of future novel lightweight materials.

The metal wires under study are extremely small: Their diameters are just twenty nanometres (millionths of a millimetre). The tiny structures demonstrate fascinating properties, and in particular they are extremely strong. "In principle these nanowires can be thousandfold stronger than millimetre-sized metal bodies" says project leader, Prof. Jörg Weißmüller. The scientist leads the Institute for Material Physics and Material Engineering at the TUHH as well as the "Hybrid Material Systems" group at HZG’s Institute for Materials Research. "This makes them very interesting for future applications." For instance, lighter and therefore more energy-efficient automobiles built from such high-tech materials could be envisaged.

The detail of how the nanostructures behave is not yet very accurately known in the scientific community. Most insight on mechanisms comes from computer simulations. Here, the experts assemble dozens of atoms into small, virtual metal particles with which they then carry out real experiments in supercomputers. These computer experiments yield exciting and plausible results. However, experimental verification is often missing. The reason: It is extremely hard to characterize the mechanical properties of nanoparticles. The classic material research testing machines are poorly adopted to the task – they are massive presses with braces that can be as thick as thighs. 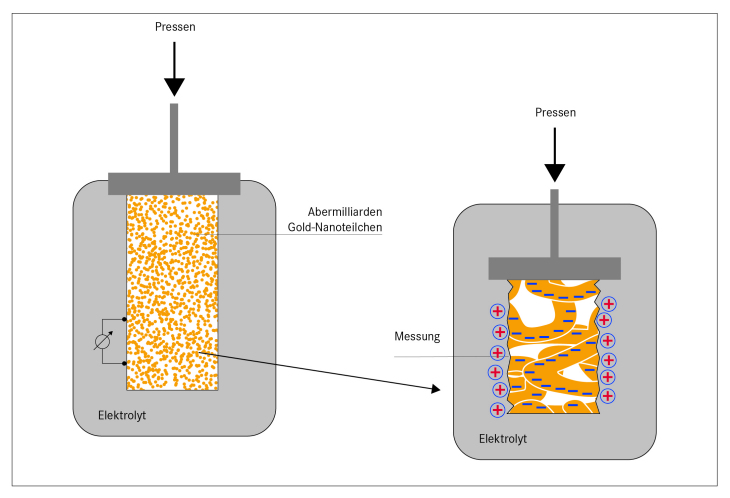 Mechanical Test for Nanowires: Millions of these gold nanoparticles are linked together to form a porous network. From this, millimeter-sized sample cylinders can be manufactured. The sample is immersed in acid solution, with applied electrical voltage surface phenomena can be examined. [Graphic: HZG / Maren Wilfert]

Weißmüller and his colleagues succeeded in developing a clever experimental set up – a mechanical test procedure for nanowires. The trick: They combine billions of gold nanowires into a porous, sponge-like network consisting of one quarter metal and three quarters air. Millimetre-sized test cylinders can be produced from this nanoporous gold – large enough for a conventional testing machine: A punch presses on the cylinder, and in the process all the nanowires are simultaneously deformed. The experts can subsequently deduce the behaviour of the individual wires. In addition, the test piece is immersed in an acid solution acting as an electrolyte and an electrical voltage can be applied. Thereby the researchers can systematically manipulate the surface phenomena which are quintessential for the nano-cosmos. In some instances, surface contributions can even be repeatedly switched between “on” and “off”.

"In one case, with our experiments we were able for the first time to confirm the results of the computer simulations", says Weißmüller. "In another case we were able to show that it is quite different to what was originally thought." In their article in "Nano Letters" the researchers were able to prove that, as suspected, it is the forces on the surfaces of the nanoparticles which lead to the enormous strength. The reason: In a large macroscopic body the vast majority of atoms are inside the crystal, only a fraction is found on the surface. With nanoparticles, by contrast, a large fraction of the atoms sit in the surface. As a result, the surface effects are decisive for the mechanical behaviour. The HZG researchers were now able to demonstrate this by weakening and even switching off certain surface effects in their experiments.

In their current publication in "Nature Communications", the specialists succeeded in shedding light more closely on the nature of the surface effects and determining the influence of two different phenomena. "We had a surprize here", said Weißmüller's colleague, Dr. Nadiia Mameka. "Our results have disproved the interpretation of previous computer experiments." As it runs out, it is not--as assumed--the force acting between the surface atoms which determines the mechanical properties of the nanoparticles. "Instead it is likely to be the energy in the surface which is responsible for the strength“, explained Mameka. "This is new and had not been expected."

In the future, such knowledge could help in the development of innovative materials based on nanotechnology – highly interesting, perhaps, for lightweight construction but also for materials with built-in sensor properties. "Due to the fact that we better understand the fundamental properties of these nanowires" emphasized Jörg Weißmüller, "we are better able to target the development of future materials."