Prof. Andreas Schreyer, Head of the Institute of materials research, is the new Scientific Director of the ESS

Currently a large facility used for neutron research is under construction in the southern Swedish city of Lund: the European Spallation Source ESS. Institute director and physicist from the Helmholtz-Zentrum Geesthacht, Prof. Andreas Schreyer, is the new scientific director of this future-oriented centre starting in January

“I congratulate Andreas Schreyer on this new stage in his career and wish him much success in this exciting endeavour,” says Otmar D. Wiestler, President of the Helmholtz Association. “This impressive appointment attests to his outstanding scientific qualifications and to the Helmholtz-Zentrum Geesthacht’s international esteem.”

“I’m happy for Prof. Schreyer and have gladly agreed to his appointment. This will be of enormous benefit to German and European neutron research," says Prof. Wolfgang Kaysser, Scientific Director of the Helmholtz-Zentrum Geesthacht. “As a research centre, however, we naturally regret that we’re losing a highly competent and exceptionally engaged scientist in the field of neutron and synchrotron radiation.“

Since 2006, Prof. Andreas Schreyer has been leading the Department of Materials Physics at the Institute of Materials Research. Schreyer, who holds a PhD in physics, created the German Engineering Materials Science Centre, GEMS, and has been speaker of the Helmholtz program ”Large-scale Facilities for Research with Photons, Neutrons and Ions" since 2008 (starting in 2015, it was renamed “From Matter to Materials and Life").

Under his leadership and based on the many years of expertise provided by Geesthacht scientists, the HZG has already participated in creating the ESS with the BEER instrument, the Beamline for European Materials and Engineering Research. As chair of the steering committee of the BMBF project of German research institutions for the ESS, in which the Helmholtz-Zentrum Geesthacht, the Research Centre Jülich, the Technical University Munich and others are included, he managed the cooperative development of various instruments for the ESS as well as the coordination between partners.

“My aim is to develop the ESS as the leading global neutron source without missing deadlines or exceeding budgetary limits. In Lund, we will provide a much higher neutron flux than all spallation sources in the world thus far. With a total of twenty-two planned instruments, we will facilitate research into numerous societally relevant fields such as medicine or materials science. I very much look forward to this challenge,” says Prof. Andreas Schreyer. His tasks in Lund include coordinating the construction of the initial sixteen instruments as well as managing all scientific use of the ESS.

About the European Spallation Source ESS: 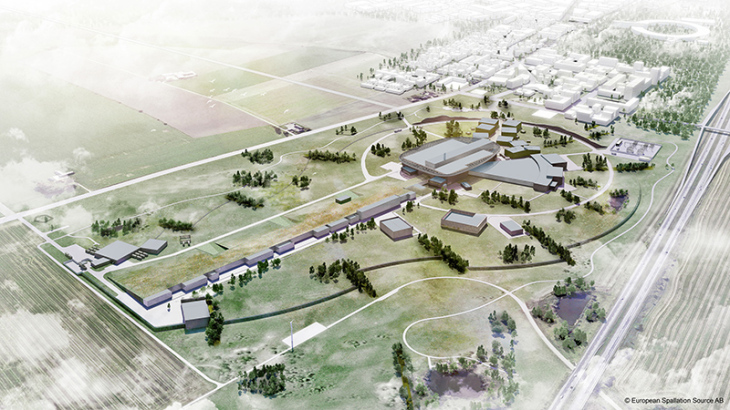 For some 1.8 billion Euro the European Spallation Source ESS is created in southern Sweden. [Photo: ESS]

The ESS will provide the most modern infrastructure for research using neutrons and will serve numerous research fields: from biology to life sciences to materials and energy research. The ESS neutron source will no longer rely on nuclear fission that has until now been necessary in research reactors. Using spallation, particles are fired at a metal target in such a way that an enormous number of neutrons are released, which can be used for research experiments. The facility is to provide neutrons beginning in 2019 and full use of operation is sought by 2025. It is then presumed that up to five thousand scientists from all over the world will use the ESS annually.

After completing his university studies in physics and his dissertation at the Ruhr University Bochum, Andreas Schreyer became professor at the University of Hamburg in 2001 as well as department head at the Helmholtz-Zentrum Geesthacht. He became acting institute director of Materials Physics in 2003 and was named director of the division in 2006. He has been speaker of the Helmholtz PNI program since 2008 and since 2011 he has been chair of the BMBF project steering committee for the German research institutions participating in the ESS.
The 52-year-old physicist is married and lives near Lüneburg with his wife and two grown children.