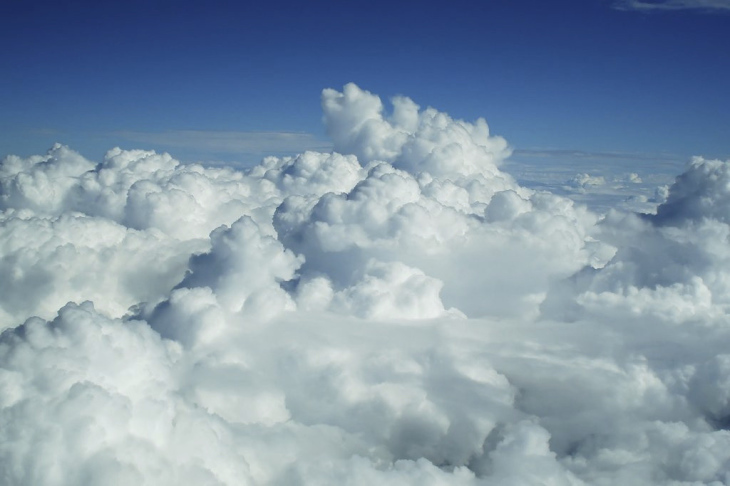 On 20 January 2020, the almost six-week field study EUREC4A (Elucidating the role of clouds-circulation coupling in climate) will start. It aims at validating theories on the role of clouds and convection for climate change through extensive measurements in the atmosphere and ocean. In addition, EUREC4A will study how fine-scale features in the ocean – eddies and fronts – interact with the atmosphere. The scale and coverage of the measurements will provide opportunities to evaluate a new generation of climate models and satellite data products.

The French-German initiated field study involves more than 40 partner institutions and the deployment of five research aircrafts, four research vessels, ground based remote sensing and satellite remote sensing east and south of the Caribbean island of Barbados. EUREC4A is led by Prof Bjorn Stevens, Director and head of the department “The Atmosphere in the Earth System”at the Max Planck Institute for Meteorology (MPI-M), and Dr Sandrine Bony, Director of Research at the Laboratoire de Météorologie Dynamique, Paris, France. Their initiative builds on, and extends, a decade of cooperation with Barbadian scientists at the Caribbean Institute for Meteorology and Hydrology (CIMH), under the leadership of its Principal, Dr David Farrell.

Clouds are an essential climate factor. How shallow clouds in the trade wind regions react to global warming determines to a large extent how fast and intensive future climate change will be. Science has so far investigated the role of clouds and convection in the climate system using theories and climate models. To verify these, researchers need observational data on the dynamics of the atmospheric and oceanic conditions in which the clouds form and dissolve. With the extensive measurements during the EUREC4A field study, they will study the life cycle of convective clouds in the trade wind region in great detail in order to obtain as complete a picture as possible. 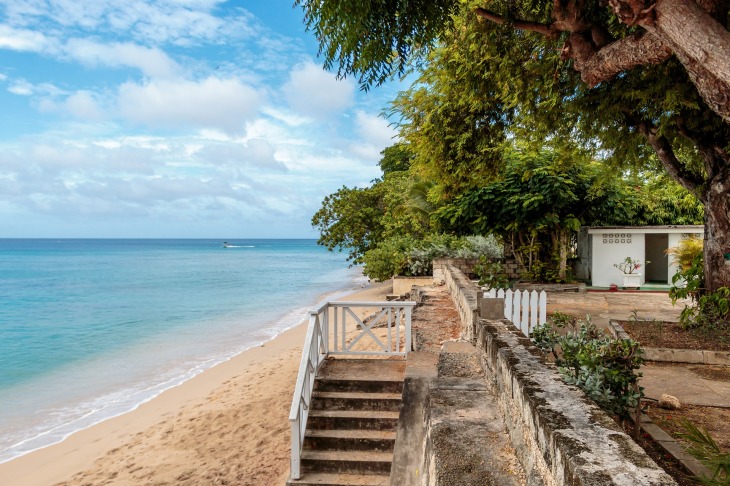 Analyses of the international climate model intercomparison studies (CMIP) over the last decades have shown that a reduction in the trade wind clouds caused by global warming leads to a further increase in global warming, a so-called positive feedback. Principal investigator Bjorn Stevens: “We will test whether the behavior of models, which show a large decrease in cloud cover with warming, is correct. If so, it would imply that higher estimates of the expected warming from increasing CO2 are more plausible. For the question of the cloud response to climate change there is still much uncertainty. We intend for EUREC4A to change that.”

In numerical models, trade wind cumuli react differently to climate perturbations. Complex climate models project that the area covered by shallow clouds is very sensitive to the surrounding environment while process models show the opposite. Understanding and resolving these contradictions are the basis for the field study EUREC4A. The most important research questions are: How resilient or sensitive is the shallow cumulus cloud amount to variations in the strength of convective mixing, surface turbulence and large-scale circulations? How do the radiative effects of water vapour and clouds influence shallow circulations and convection? What are the implications for the spatial organization of clouds and convection in the tropics, and for climate sensitivity, i.e. the sensitivity of the climate system to a given perturbation, for example by additional greenhouse gases?

Principal investigator Sandrine Bony: “Estimates of climate sensitivity remain very uncertain, and most of this uncertainty stems from the response of low-level clouds in the tropics, especially in the trade-wind regions. The low-clouds near Barbados are representative of the low-clouds that populate the trade-wind regions over the whole Tropics. Hence, what we will learn from EUREC4A will not only serve our understanding of Barbados clouds but of tropical clouds more generally.”

The campaign and its measuring platforms 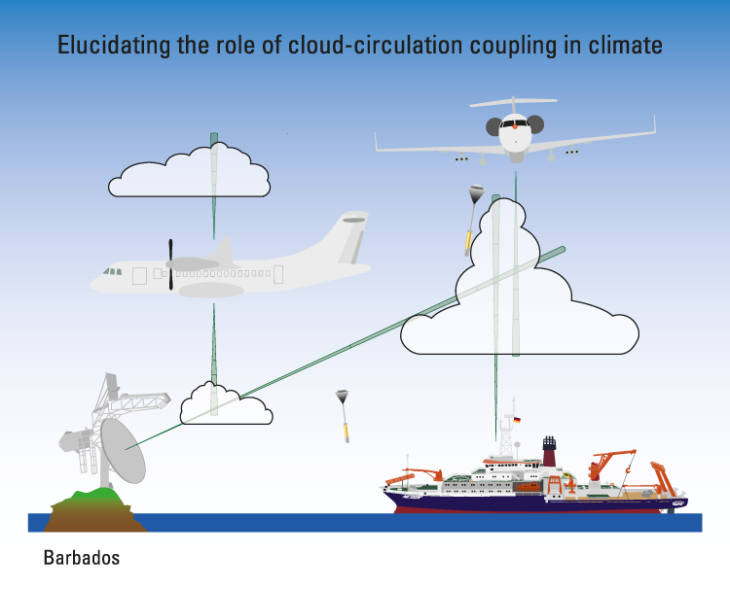 In addition to a better understanding of the coupling processes of clouds and circulation, the campaign will provide a reference data set through its extensive measurements. It will serve as a benchmark for model improvement and satellite remote sensing of clouds and circulation. Felix Ament, Universität Hamburg: “The image we will capture of clouds and their interplay with the atmosphere during EUREC4A will be more detailed, multi-faceted and complete than ever. In this way, we want to create a benchmark that will spur and inspire science in the coming decades.”

The nucleus for the field study involves the deployment of five research aircrafts, four ocean-going research vessels, advanced ground based remote sensing at MPI-M´s Barbados Cloud Observatory (BCO), a new generation of sophisticated satellite remote sensing methods, and state-of-the-art turbulence-resolving climate models (100 m grid size, over thousands of km). Susanne Crewell, University of Cologne, explains the special features of the campaign structure: “Only through this combination of diverse measurements and high-resolution simulations is it possible to analyse the decisive processes in detail and thus expand our understanding.” 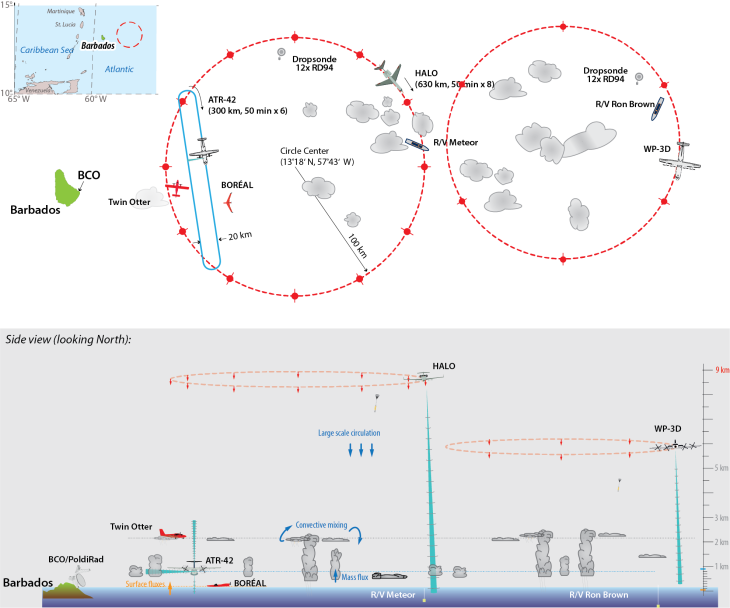 Figure: Schematic of planned EUREC4A flight operations and ship-based measurements. The low-level flight legs will map out the cloud conditions and constrain the mass budget of the sub-cloud layer, the surveying circles will document the large-scale conditions with sondes, and remotely sense the underlying cloud field. Ship-based surface remote sensing will complement aircraft measurements and also support in-situ measurements using kite-borne sensors. EUREC4A will be the largest field campaign to study shallow clouds and their interplay with the atmosphere and ocean. Fig: N. Noreiks, B. Stevens, MPI-M

The centerpiece of EUREC4A will be the deployment of five research aircrafts on Barbados: The French ATR-42 will deploy in-situ and remote sensing sensors in the lower troposphere. The German research aircraft HALO of the German Aerospace Center (Deutsches Zentrum für Luft- und Raumfahrt; DLR) has a range of up to 8000 km and an upper operating altitude of 15 km and is equipped with an extensive set of remote sensing instrumentation and a dropsonde capability. A Twin Otter from the British Antarctic Survey (BAS) will focus on the measurement of aerosols and the turbulent and microphysical cloud structure. Additionally, the US research aircraft WP-3D ORION of the National Oceanic and Atmospheric Administration (NOAA) and the permanently on Barbados based aircraft of the Regional Security Service (RSS) will support the measurements. The flights of the WP-3D will complement HALO´s measurements, by, among other things, characterizing the large-scale conditions and their connection to the research vessels operating near the coast.

The aircraft measurements will be anchored by measurements from the Barbados Cloud Observatory (BCO) and the flexibly controllable weather radar POLDIRAD (Polarization Diversity Doppler Radar) that will be stationed on the southeastern plateau at a distance of 8 kilometers from the BCO during the campaign. Martin Hagen, DLR: “POLDIRAD enables the detection of precipitation development with high temporal and spatial resolution in an area of up to 250 km east of Barbados. The measurements at the BCO, the ships and along the flight paths can thus be associated with the spatial and temporal context of large-scale precipitation distribution and development.”

In addition to the aircraft and BCO measurements, the campaign will encompass intensive ship-based observations with four research vessels. The German research vessels METEOR and MARIA S. MERIAN, the US research vessel RONALD B. BROWN and the French research vessel L'ATALANTE will participate. The research vessels serve as remote sensing and in-situ platforms for both atmosphere and ocean observations. These include radiosondes, lidar and radar techniques as well as balloon kites (“Max Planck CloudKites”) and autonomous flying vehicles. “The spatial variabilities at the sea surface are important boundary conditions for the development of the overlying atmosphere and thus also for cloud formation”, says Johannes Karstensen, GEOMAR, Chief Scientist aboard MARIA S. MERIAN. “Especially in large eddies and frontal zones, we want to understand the coupling of oceanic and atmospheric processes and thus make them easier to represent in model simulations.” The scientists will also survey biological factors that influence, for example, the oceanography, the ocean-atmosphere exchange of greenhouse gases and the carbon export.