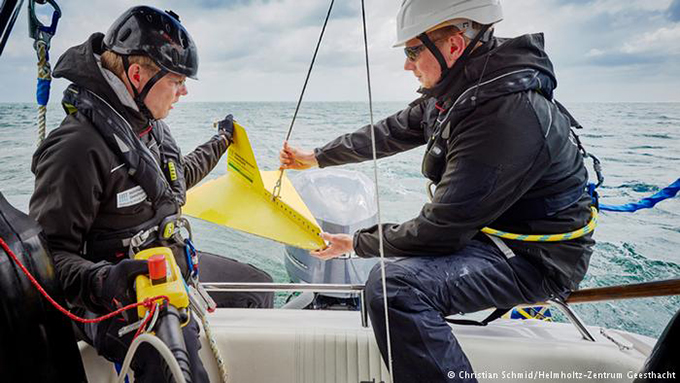 Only recently, it became clear that the entire world’s oceans are significantly influenced by small ocean eddies and fronts. These submesoscale features are only a few hundred metres to a few kilometres in size, but seem to play an important role for phytoplankton production and the transport of energy in the oceans. Due to their small sizes and very short life times of only hours to days, only few measurements could be made to date resolving them sufficiently.

To locate the eddies, the Institute of Coastal Research uses aeroplanes and a zeppelin equipped with extremly sensitive infrared cameras. Speed boats are then used to survey the eddies repeatedly before they decay. In order to carry our measurements in many different water depths simultaneously, a measurement chain has been developed sampling the upper 45 m of the water column at tow speeds up to 10 knots.

Such measurements are conducted by the research group of Submesoscale Dynamics.
In combination with other remote and in situ observation techniques, the data provide insight into the physical and biogeochemical dynamics of submesoscale processes in an unprecedented resolution. High-resolution numerical models are used for the further interpretation of the measurements. Presently, the Regional Ocean Modeling System (ROMS) is applied in a multiple offline-nested mode to the area of the observations.

The department is also contributing to the Coastal Observing System for Northern and Arctic Seas (COSYNA) and is investigating the impact of large-scale offshore windfarm construction on the North Sea.

Taking water temperature measurements from the zeppelin. Ocean eddies are small and short-lived and are therefore difficult to measure. Special cameras help to capture them with precision.
(Article on ESKP)