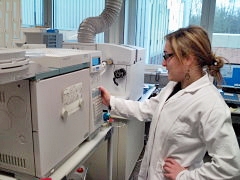 The objective of this project is the provision of a metrologically validated procedure of measurement for the brominated diphenyl ethers BDE 28, BDE 47, BDE 99, BDE 100, BDE 153, BDE 154 including appropriate methods for extraction and preconcentration of these PBDEs.

The limit of quantification (LOQ) should be smaller than 30% of the EQS value of 0.5 ng/L for the sum of PBDEs in whole water samples as defined in the WFD.

Adriana Gonzales-Gago is our scientist in charge for the practical work and communication within this three-year Eu project.

Scientific and technical objectives of this Research Excellent Grant REG

The Joint Research Project (JRP) ENV08 “Traceable measurements for monitoring critical pollutants under the European Water Framework Directive (WFD) 2000/60/EC” is a multi-partner trans-national project within the targeted call “Environment” of the European Metrology Research Programme (EMRP).
The JRP ENV08 is coordinated by the German Federal Institute for Materials Research and Testing (BAM) and involves 12 European institutes from 8 countries as well as the European Commission. The majority of JRP partners are National Metrology Institutes (NMIs) or Designated Institutes (DIs). All JRP partners have a proven experience in the development and validation of analytical methods, the preparation of reference materials, the organisation of interlaboratory studies and environmental monitoring. The JRP partners all have both national and international recognition, which ensures that the results of the project will be widely respected in the EU. The Department of Marine Bioanalytical Chemistry is the home organization of a Research Excellent Grant (REG), which complements the JRP consortium.
The JRP consists of five scientific/technical workpackages (WPs), WP1 to WP5, an impact workpackage WP6 and a management workpackage WP7. The research activities of this REG address the issues raised in WP2 lead by the Physikalisch-Technische Bundesanstalt (PTB).

7th edition of the International Franco-Spanish Workshop on Bioinorganic Analytical Chemistry (Gijon, Spain, 1-4 July 2012) Oral contribution. Sensitive detection of bromine by GC-ICP-MS for the determination of PBDEs in coastal water samples according to the Water Framework Directive (WFD)

23. ICPMS Anwendertreffen und 10. Symposium Massenspektrometrische Verfahren Elementspurenanalyse (Vienna, Austria, 10-12 September 2012) Oral contribution. Evaluation of the sensitivity of the GC-ICP-MS coupling for the determination of PBDEs in water samples according to the Water Framework Directive (WFD)