The Perfect Form for Pauline & Yasmine

Using “weather hindcasts” we can gain insight into the future: ships of tomorrow are built in Flensburg with the help of weather data from the past. The weather models developed by coastal researchers in Geesthacht allow us to draw conclusions on the seaworthiness of ships before they are built. 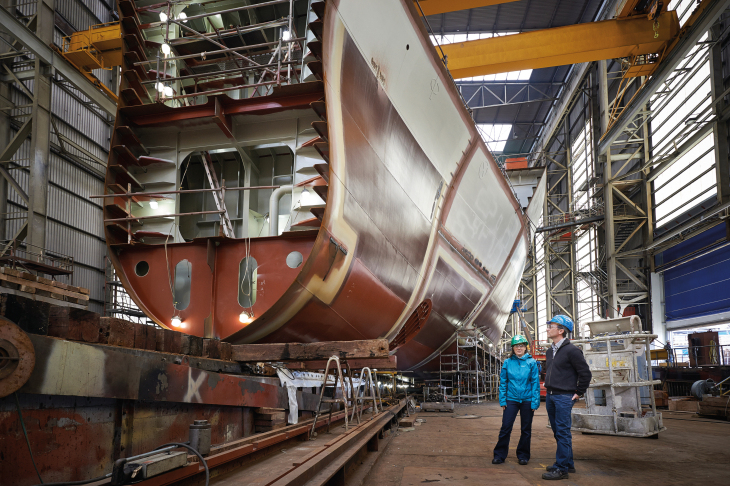 Marine engineer Dr. Katja Wöckner-Kluwe utilises data from the Institute of Coastal Research in her work at the Flensburg Shipbuilders to, for example, develop safer ships or to develop ships that take into account passenger comfort as well as the required seafaring characteristics of the vessels.

The data project coastDat has made its results available to designers for simulating ship movement for several years now. Cooperation began between the coastal researchers and the Flensburg shipyard in the early 2000s. The designers at the time sought sea state data for the North Sea. They speciﬁcally wanted data for a planned ferry route between Immingham, England and Zeebrugge in Belgium. The Flensburg team wanted to know what wave heights could be expected in the region. This exact data had already been determined by coastal researchers in the predecessor to the coastDat project, HIPOCAS.

Ralf Weiße, coastal scientist and leader of the Coastal Climate Department, remembers: The designers asked themselves how often they would need to fasten or secure the freight and, if so, would they need any additional stabilisers.

Katja Wöckner-Kluwe elaborates: “Though I didn’t cooperate on this project, I know that data was sought at the time so they could examine virtual ship travel through sea conditions on this route.“ 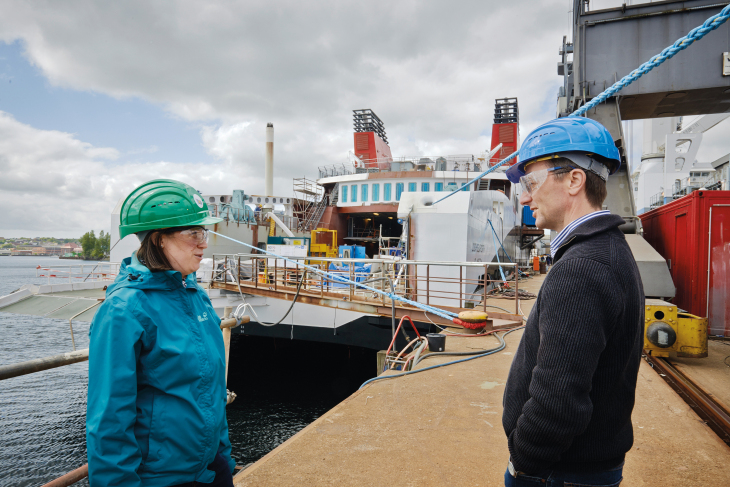 The coastal researchers’ meteorological data are used for this purpose in the shipyard’s simulation software. The software calculates the anticipated movement of the ship based on the coastDat data. In the case of Yasmine and Pauline, the two cargo ferries planned back then, the ships were custom-made for the England route. Because time is money in modern shipping, securing the lorries on deck means delays. Katja Wöckner-Kluwe: “With a customized design of the hull shape or by using other measures such as roll damping stabilisers, we can improve the seaworthiness of the ship.” The ship schedule then becomes more accurate or the vessel can lie in the water with more stability, depending on the requirements. 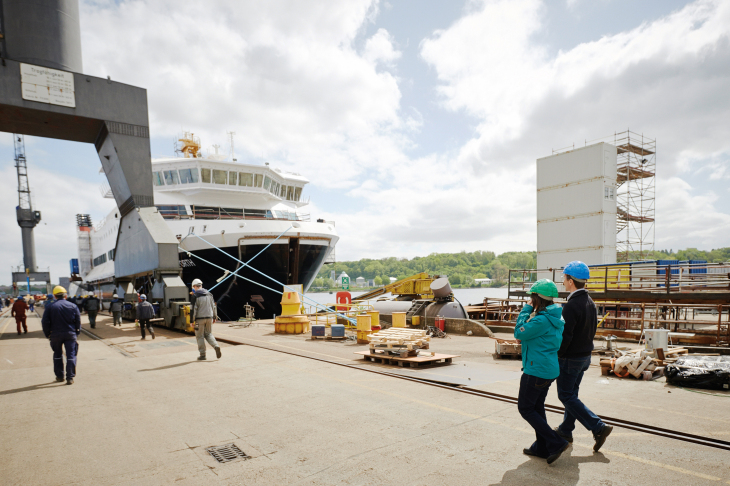 Safety aspects also play a role in the design of the ship: for the ferry currently in the shipyard that will be traveling in the waters off Scotland, the marine engineer wanted to know the speed and force at which the water would hit the bow door, which is located at the front of the vessel. Katja Wöckner-Kluwe: “We calculated the relative speed between the waves and ship. From that data, we could determine the force on the bow door. In order to do so, we looked to our simulation: we examined in which sea conditions particularly high relative velocities could be found as well as the forces that accompanied these speeds. The dimensions of the bow door are then determined by these forces.” 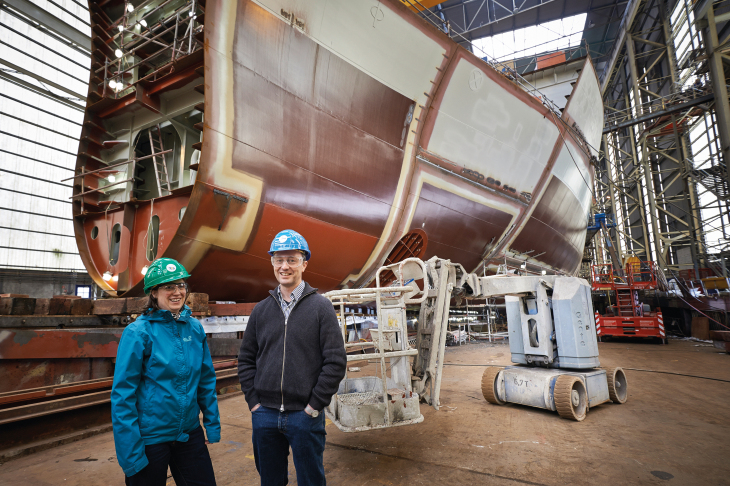 With which wave heights should we calculate? Katja Wöckner-Kluwe and Ralf Weiße discuss the data on-site. Photo: Hereon/Christian Schmid

These safety calculations are also made so that an accident like the Estonia never happens again. After the 1994 disaster, in which almost nine hundred people died, reports determined that the Estonia’s bow visor was torn off during heavy seas and from the resulting forces. Data for shipbuilding was rather a by-product in the coastDat project, or it’s forerunner, HIPOCAS. The Geesthacht scientists originally wanted to know how storm tides or extreme sea conditions change over long periods of time in the North Sea.

Ralf Weiße: There is very little data available. Isolated data exists from measurement buoys or stations on the open sea, but there are no continuous measurement series covering several decades that were gathered using the same methodology. 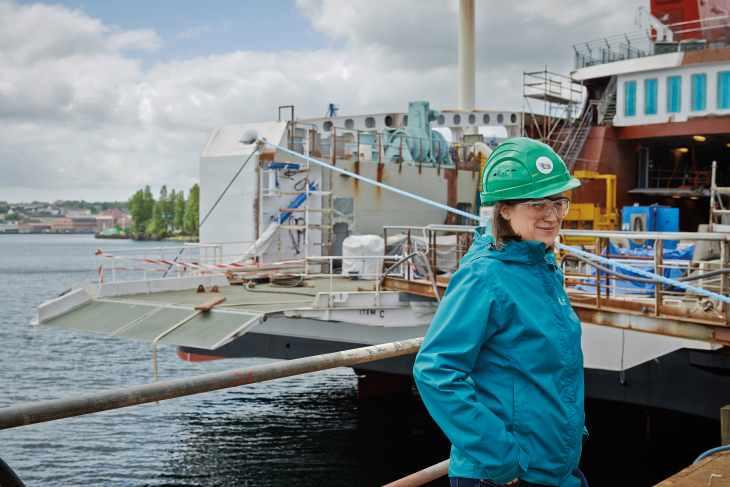 This can lead to misinterpretations. Changes, for example, in measurement methodology can lead to simulated trends that don’t exist in reality. In addition, there exists natural climate variability over periods of forty to ﬁ fty years that show no tendency one way or the other.” Scientists worldwide therefore developed methods to obtain the most precise information possible for regions where very few measurements exist. The technique, which has gained acceptance in situations where there is little data available, is based on combining the models with the measurement data. The coastDat data set is also modelled on such an approach. Based on global model calculations, in which existing measurements were integrated, the Hereon researchers develop scenarios dependent on their numerical model simulations for locations in which there are no real measurements. Ralf Weiße: We provide information about parameters such as wind or wave height based on the numeric models. Ultimately what results, for example, are wind and wave direction frequency distributions. So we basically create a weather forecast in reverse.

Katja Wöckner-Kluwe: We are extremely interested in sailing our ships in a virtual Baltic Sea as well as other regions in the future. We also get inquiries from customers for ships that will sail there. 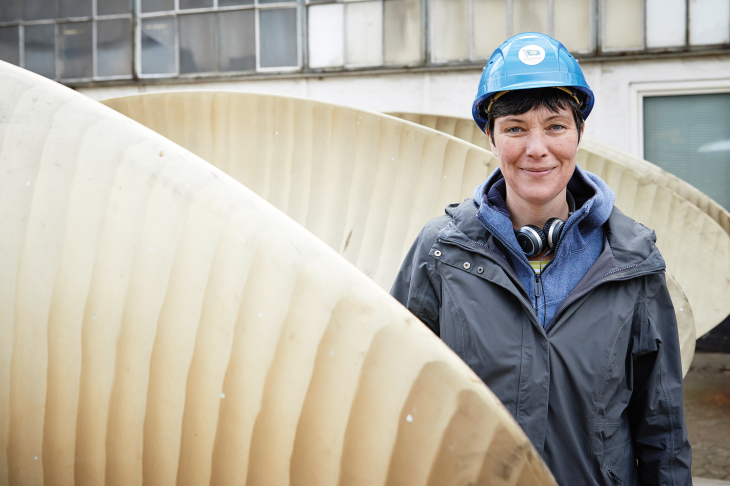 Success: the coastDat data set can display the climatological sea state from 1958 to today. It produces a virtual North Sea for the past ﬁ fty to sixty years. One important ﬁnding that the coastal scientists derive from this research is that storm activity over a period of decades is subject to considerable variability, but no longterm trend can be discerned. Nevertheless, storm ﬂoods are about twenty centimetres higher than one hundred years ago. The scientists attribute this to the average sea level rise, which causes the base level for storm ﬂoods to generally be higher today.

Data from coastDat cannot only be utilised in terms of climate changes in the marine environment and for ship design adaption, but the statistics are also interesting for the planning and logistics of offshore wind parks or for risk assessment. Other regions are of further interest.

Who knows, perhaps there will soon be ships traveling on the Baltic Sea that have been optimised based on the Hereon data. That would certainly please coastal scientist Ralf Weiße. “We were there when Yasmine launched. That was an uplifting moment when our data made it into the form of the ship on the water.”