Ten Litres of Snow and Twenty-Four Hours of Air: Research in the Arctic

July 2018. The sea is calm. Everyone is going about their business on board. We’re in the laboratory of a research ship. Suddenly there are shouts, and many people run on deck. Finally, after more than two weeks, the Polarstern is surrounded by ice. Then everything becomes very calm. Only the sound of the ice breaking apart can be heard as we move through slowly. It is a moment of awe for everyone. 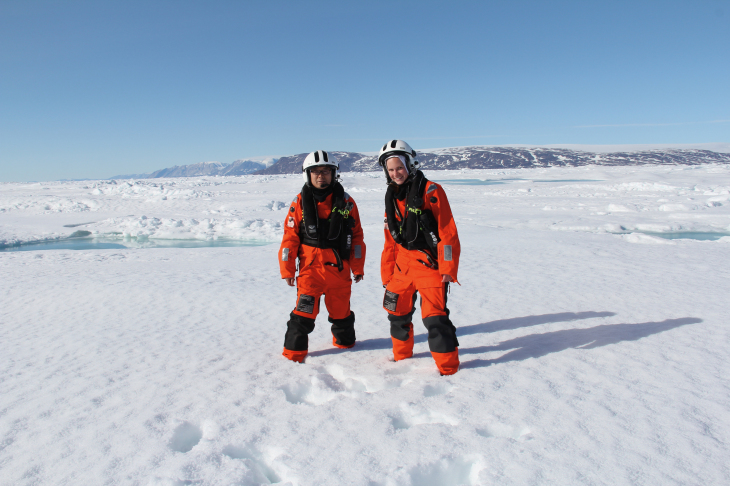 10th of July. The day had finally come. The PS114 expedition began in Bremerhaven aboard the German research vessel Polarstern. We stood on the ship deck and watched the people on land grow smaller. After a long period of preparation for the journey and the numerous bureaucratic details that needed to be taken care of, it seemed almost unreal - but then you realise: here we go.

The POLARSTERN belongs to the Alfred Wegener Institute, Helmholtz Centre for Polar and Marine Research (AWI). In the beginning, we had to cover quite a distance. We travelled past Norway, initially in the direction of Spitsbergen. The research area we aimed to reach was the Fram Strait between Spitsbergen and Greenland.

The subject of our research. 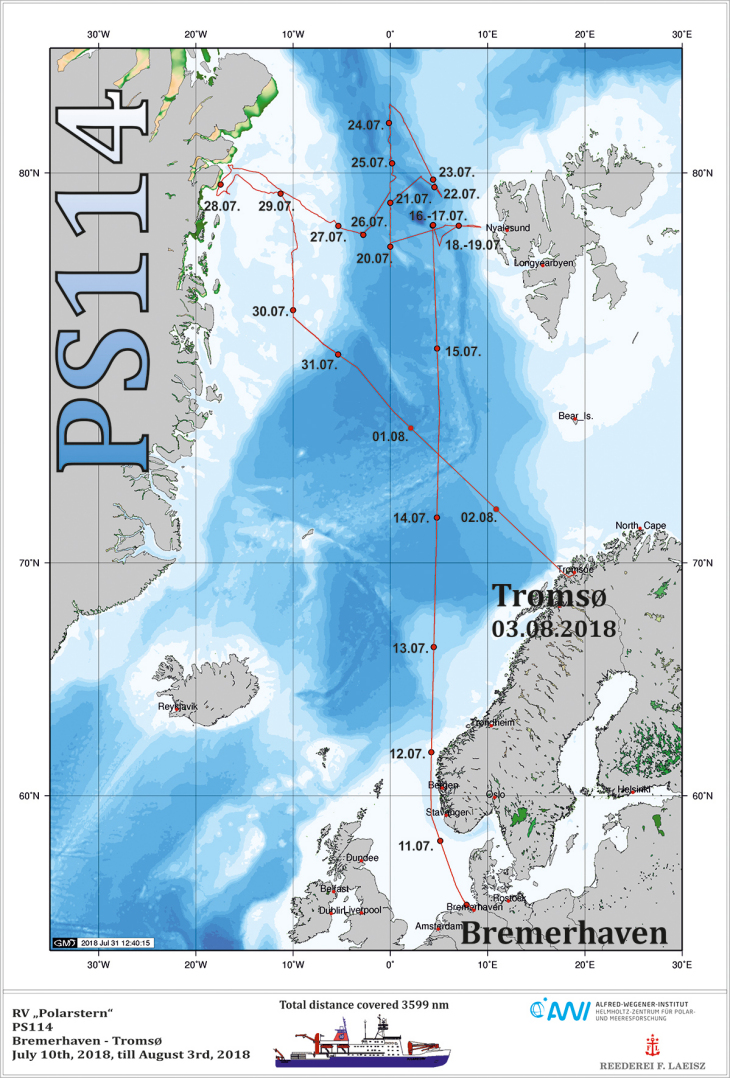 The aim of our journey was to study the occurrence, distribution and fate of emerging organic pollutants along potential transport pathways, from the European continent to the Arctic. To do so, we collected water, air and snow samples. Long-living and slowly degradable chemical compounds are called persistent organic pollutants or POPs. these environmentally hazardous chemicals are regulated in the Stockholm Convention, which came into force in 2004 and is ratified by 182 parties. Production and use of some substances is restricted in the convention, and others are completely banned. In addition to the regulated “classic” pollutants, new contaminants are always appearing. These, for example, can be substances that are introduced into the market by the industry to replace prohibited materials, or those that can only be definitively determined by using new analytical methods and novel sampling strategy after the substances have entered the environment.

To be included in the Stockholm Convention, substances must meet the following criteria: persistent; bioaccumulative and toxic; and transport over long distances. Our results on the occurrence of emerging problem substances in remote regions can be integrated into the assessment as to whether they should be included in the Stockholm Convention or whether they should otherwise be regulated by law.

We also ask ourselves how climate change impacts pollution. When the ice melts in the polar regions, contaminants that were previously stored within the ice can be released. What routes they take, however, is still unclear. That is why we have taken water, air and snow samples. 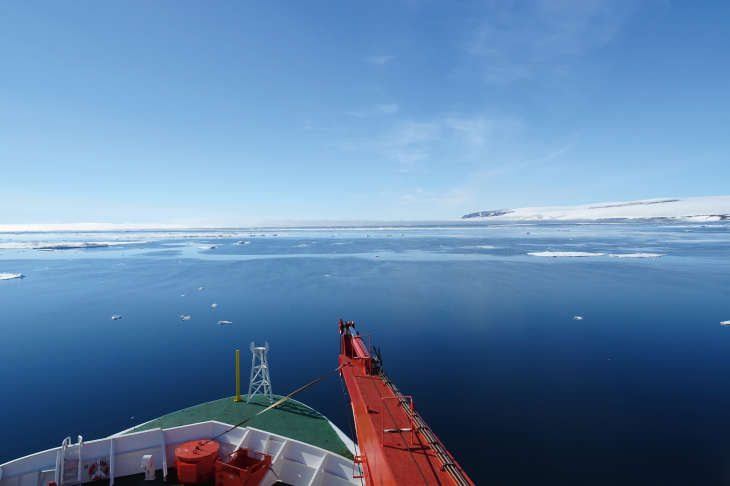 Hanna Joerss: “That was pretty exciting. It was the first big expedition for me. So far, I’ve always sailed with the Hereon’s ship, the Ludwig Prandtl. The large POLARSTERN, in contrast, seemed like a floating village to me. I’m happy that Zhiyong was there. He already knew the ship and could point out and explain a lot to me.”

Zhiyong Xie: “Even if I’ve already taken part in several expeditions, each trip is incredibly exciting. At the same time, it was lovely to gain new insights about the Arctic on a familiar ship. I really look forward to sharing my experience with other scientists from all over the world.”[/b] 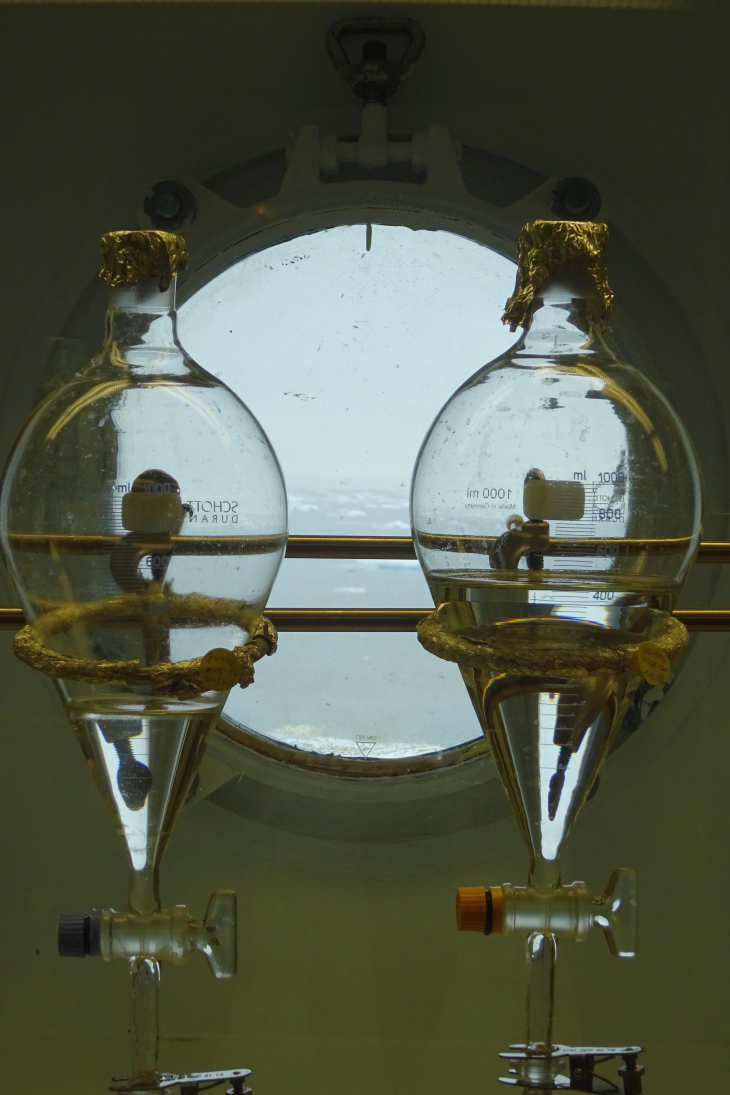 The samples are processed in the laboratory. Photo: Hereon/Hanna Joerss

Two types of water samples were important for us: one was the surface water, which is well established. The POLARSTERN has a pump under the keel that can draw the water directly into our laboratory. The pipes are made of stainless steel so as to avoid contamination. Besides, using a rosette water sampler, seawater can be obtained from varying water depths. The sample containers, which are initially open, close at different depths and sample the water at those locations. We took samples at six stations on the journey and from ten different depths at each station: ranging from near the seafloor, which in some locations is more than three thousand metres deep, up to surface waters.

Taking samples from the air. 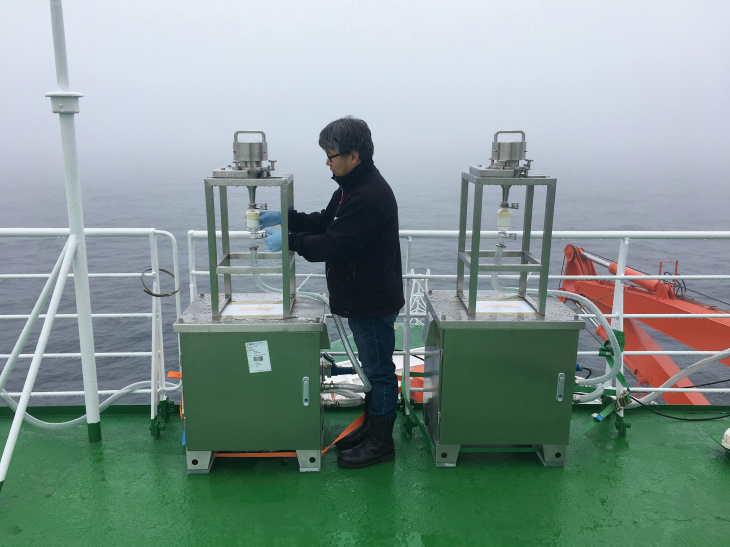 Atmospheric transport plays a considerable role for volatile chemicals. Air samples are therefore also vital for us. We brought two devices with us on board and installed them up on the top deck. There they run continuously, taking samples during the entire journey. Within the devices is an adsorption material to trap the pollutants. The air flows through for twenty-four hours, then Zhiyong changes the sample. The samples are stored at -20 °C as we can only fully analyse them in Geesthacht.

Hanna Joerss: “It was an overwhelming moment when we were surrounded by the ice for the first time. When the POLARSTERN breaks the ice and it begins to crack, you hear and sense the power of this ship.” 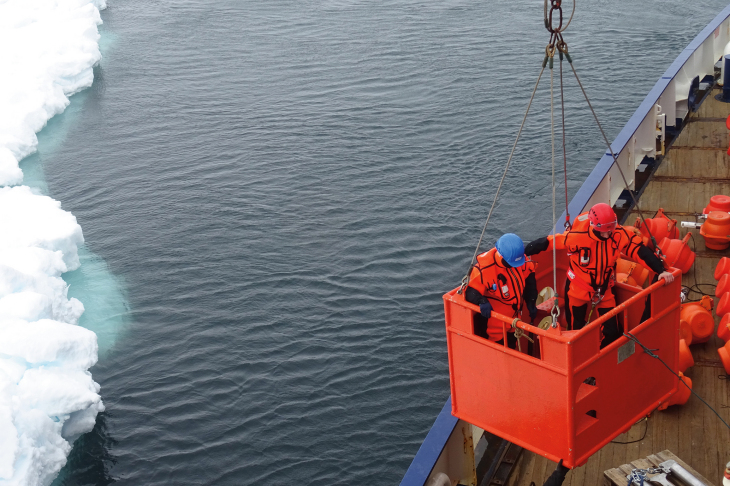 Pack ice. Everywhere. It’s unbelievable how many different colours ice can take. It was very foggy on many days and you could barely see anything. On a few days, the sun was shining all the more brightly from the blue sky. Visibility was especially critical when Zhiyong was taking snow samples. Despite the foggy weather over a long period of time, we could take snow samples from four stations.

The principle always remains the same: we need to fill a steel bucket with ten litres snow.

The question is always simply: how do we get from the ship to the snow? 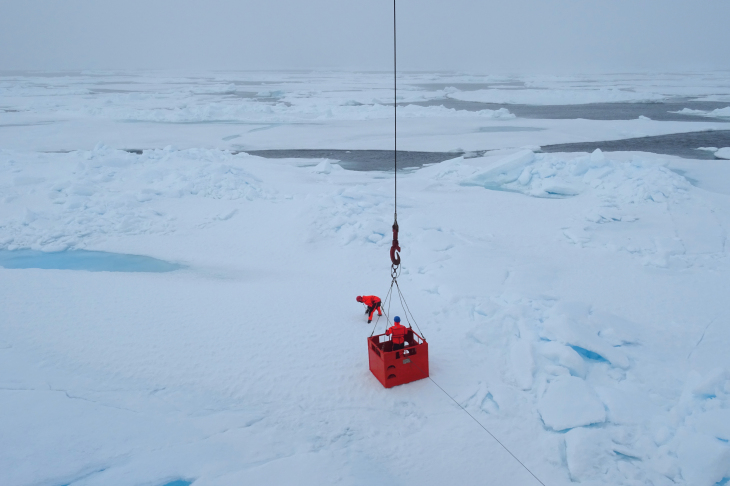 One day we merely travelled in a small boat to one location where we could get onto the ice easily and therefore could get to the snow. Twice, we used what is known as the mummy chair to reach the snow. The mummy chair is nothing but a box in which people can be transported. It is lifted overboard with a crane and placed on the ground safely. One of the two people must then be secured by rope and get out to take the snow sample about ten metres away from the location, as we want to avoid contaminating the sample. The other person remains in the box, keeping an eye on the surroundings. 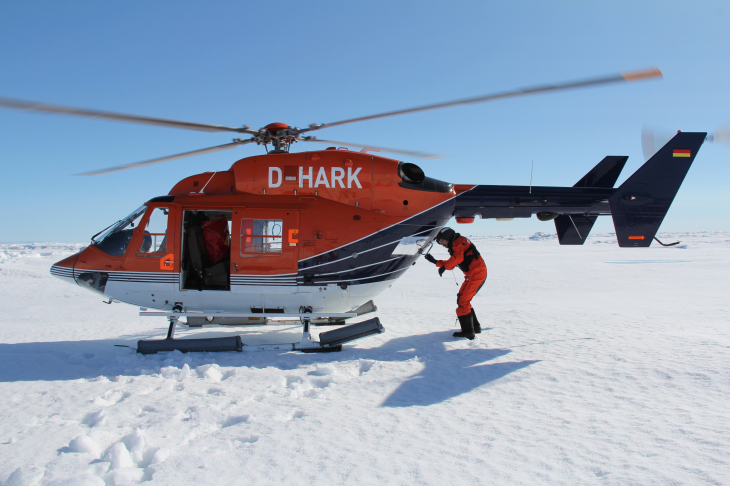 The 28th of July was a very special day. We were on the coast of Greenland and after weeks of struggling in the fog, the sun came out—we could take a helicopter ride!

For us that meant detailed safety instruction, putting on survival suits, oxygen vests, helmets—and then off we went. On board there are two helicopters; a second is always ready to go in case of emergency. We had ten minutes time to fill our buckets with snow at our station on the sea ice. The helicopter engines were running, so we needed to walk about one hundred metres to avoid contamination. Then it was already time to head back.

Back on board, we could enjoy the view of the impressive glaciers along Greenland’s cliffs – we could even observe a polar bear, a walrus and a whale. It’s amazing to see how everything seems to be in harmony here.

Laboratory work on a ship. 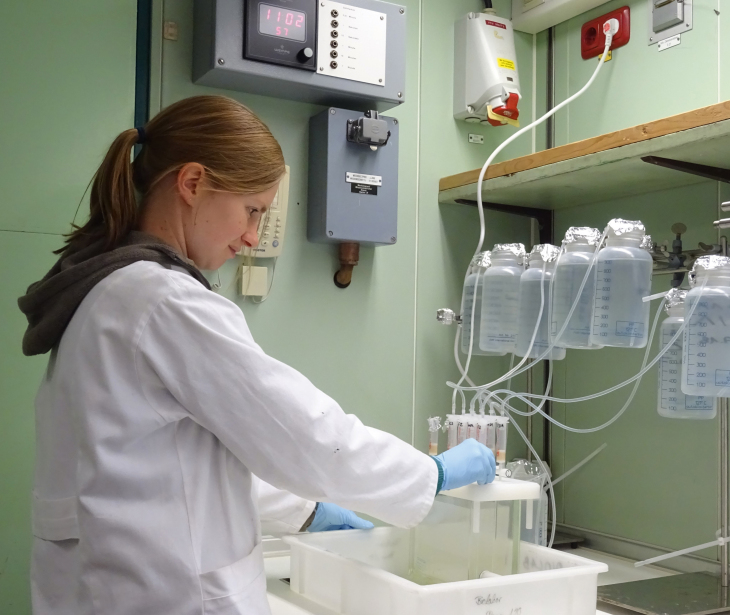 There are various laboratories on the POLARSTERN: for example, wet lab, dry lab and chemistry lab. These rooms, however, don’t resemble those laboratories we find at our research facilities. On board, they are completely empty, as the laboratories can be equipped according to research needs. This means that each group carefully considers beforehand what equipment and other resources they require on the expedition. These articles naturally include sampling vessels, pipettes and similar devices, but also consumables such as gloves, paper towels and other items. We packed twenty-nine boxes altogether at the Hereon and loaded them onto the POLARSTERN. In the laboratory, we then unpacked what we needed at the time and, most importantly, fastened everything down. We were lucky in that we encountered relatively calm seas during the entire trip so we were able to get good work done.

One day on the POLARSTERN: 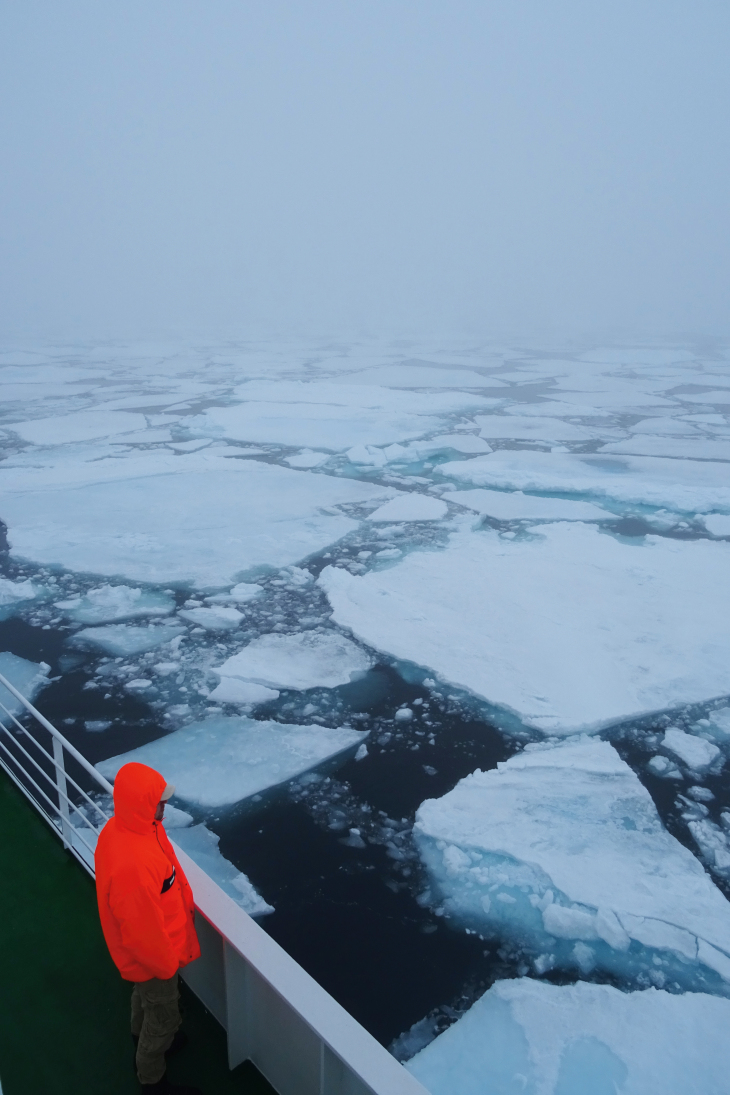 You see, you never get bored on the ship—the days here are completely structured. You work around the clock. When we arrived at a certain measurement station, we needed to take samples even if it was 2 AM. It’s unusual for us that it’s light during both day and night, so you don’t think that much about sleeping. There are also many events to provide structure to our days. Each evening we held a “science meeting”. The expedition’s chief scientist provided the news of the day; we talked about the weather forecasts for the following day, and every evening a different group discussed their project. It’s really exciting. There were forty-seven scientists on board and we do research in very different fields. We, however, don't take only scientific input with us, as we're all coming from the most varying countries and cultures. It was great to meet the people we have: an oceanographer from Mexico who could write backwards, a helicopter technician from Spain who is also a sports enthusiast, a weather technician from the former GDR who told us about how he experienced German unification from the Antarctic – just to name a few.

Then it was all over on the 3rd of August—our adventure ended in Tromsø, Norway. We packed all of our samples well –the snow and air samples even at -20 °C. They remained on the POLARSTERN until the ship returned to Bremerhaven in mid-October. We could then unpack our twenty-nine boxes and begin investigating and analysing.

After the nearly four-week journey, the samples and data must now be analysed. This means months of work in the laboratory, analyses and calculations. The results that Zhiyong Xie and Hanna Joerss obtained and whether they could detect pollutants in the Arctic will be covered in the next issue of In2Science.