Lateral Thinker with an Adventurous Spirit

Prof. Kay-Christian Emeis leads for Biogeochemistry in Coastal Seas at the Institute of Coastal Research 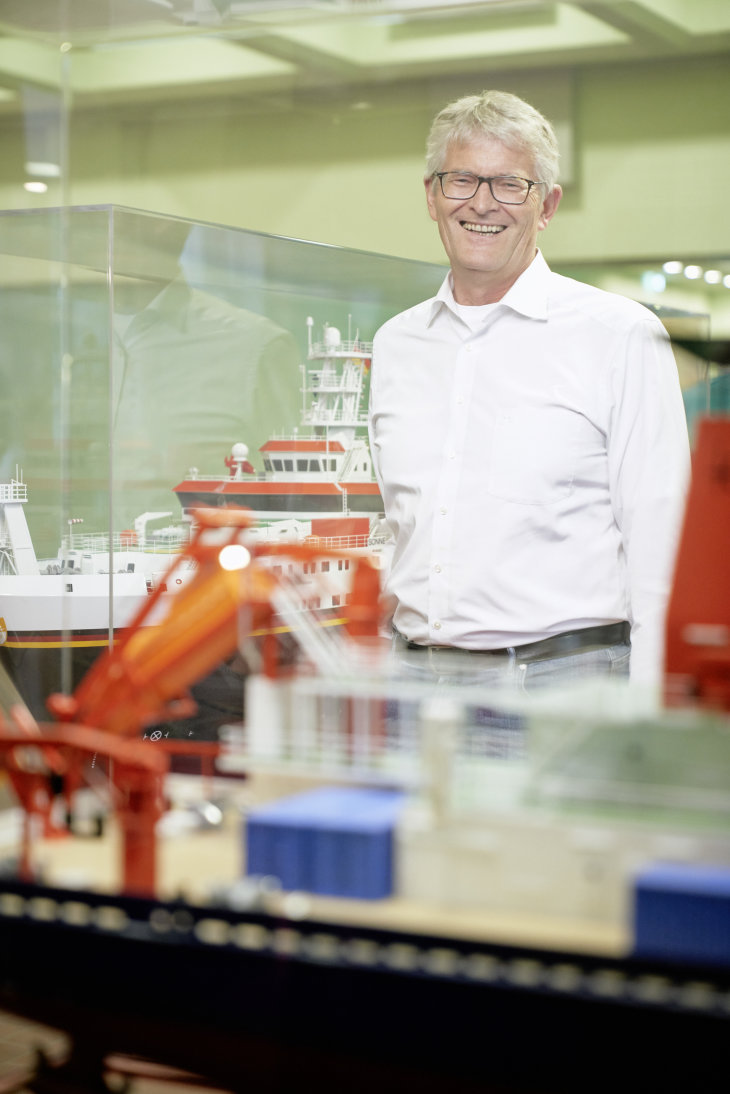 Many a discovery is made by chance. One example is when in fall 2019, the research vessel Sonne sails from Hong Kong to Mauritius. On board is Kay-Christian Emeis, institute director at the Helmholtz-Zentrum Hereon. The geologist has been looking forward to this journey for weeks - as it will be the last one for him in his post: the 64-year-old will be retiring in 2021.

Together with colleagues, he slides a measurement instrument into the ocean as dusk begins to settle. The team therefore switches on the deck lights. The light attracts flying fish, which dance on the water. Squids follow and hunt the nimble animals. “Suddenly mahi mahis appeared in the cone of light,” says Emeis, as he remembers the large, blue-gold shimmering predators, which have a special predilection for eating squid. “And then sharks thrust into the light and snap for the mahi mahis. Within minutes an entire food chain had formed before our eyes - a spectacle to behold for any researcher.”

It is moments like these that Emeis loves so much about his work: as a specialist in biogeochemistry, he wants to explore the complex connections that exist in different marine regions. How does the water’s chemical composition affect living organisms and the formation of sediments? Which organisms and processes benefit from the respective substances? And how does this interaction change with the seasons - or over the course of millions of years? Research beyond the frontiers of his field has always fascinated the native of Flensburg: with a great deal of curiosity, he not only travels all the oceans, but soaks up the knowledge from entirely different disciplines, always on the lookout for surprising cross connections. As a student he not only took courses in geology, but was equally interested in palaeontology and mineralogy. His expeditions since the 1980s have led him into the Earth, into unknown cave systems as well as up to the sea, onto the deck of research and drilling vessels. The sensitive ecosystem of tropical coral reefs interests him as much as the absence of large schools of fish off the coast of Namibia; he is interested in the prehistory of the Mediterranean as well as the German mudflats of our time. “What drives me is my curiosity and a certain spirit of adventure,” says Emeis. After all, the geology motto, according to which the present is the key to the past, also applies in reverse:

"From the geological past we learn much about the future developments of our planet."

In addition to his duties as geology professor at the University of Hamburg, he has also been leading the “Biogeochemistry in Coastal Seas” research division at the Hereon for the last nine years. He still has ambitious plans before his retirement in the coming year: he is responsible for the Helmholtz Coastal Data Center (HCDC). This new digital platform is to combine the coastal research data from different institutions and disciplines. “In the next two years we want to become the main data center for the North Sea.” There has, however, been a downside for Emeis throughout the years of growing responsibility: the number of his expeditions has dropped. For a long time now he has been sitting more often in conference rooms than in laboratories below deck. He loves life at sea despite the cramped space on board, which can sometimes become a problem for a man of his tall stature. “Ships have always been a part of my life, not only in a professional sense,” he stresses. He learned how to sail as a teenager. As to whether he still must undertake some of the physically demanding jobs on board even as head of the institute, he replies: “Of course. That’s the fun of it!”

"Exposed to the wind and weather, even at three in the morning, beacuse it's time for sampling - I like that!"

Which brings us back to discoveries that are sometimes made by chance. Because it was a coincidence that ensured Emeis was responsible for certain measurements on board the Sonne, as a colleague had fallen ill. And now the professor is sitting in front of the data. It comes from the bottom of the Mascarene Plateau in the Indian Ocean. The rocky reef just below the water’s surface is the expedition’s target and, despite its tropical location, it bears surprisingly few corals. The scientists have never been able to satisfactorily explain this deficiency. The researchers on board the Sonne therefore wanted to take sediment samples. “Taking my water samples, on the other hand, was a purely routine task,” says Emeis, “which was to also collect data on this marine region - for example, density, temperature and nutrient content of the water.”

Emeis notices how low the oxygen content is at some water depths - those locations possess unfavourable conditions for coral. Emeis sees two explanations: on the one hand, two ocean currents with very different oxygen and CO2 contents mix at the plateau. On the other, the reef lies directly in the path of the South Equatorial Current in the tropical Indian Ocean. This current flows at high velocity over the plateau. In addition, the tides affect the seafloor in such a way that the water properties there change immensely twice a day, something that makes it difficult for coral to settle.

And so it is curiosity and the merging of different disciplines that added another piece to the marine science puzzle. This approach needs lateral thinkers and those who can tackle problems. Researchers like Kay-Christian Emeis.