Martin Müller - the Man with a Perspective 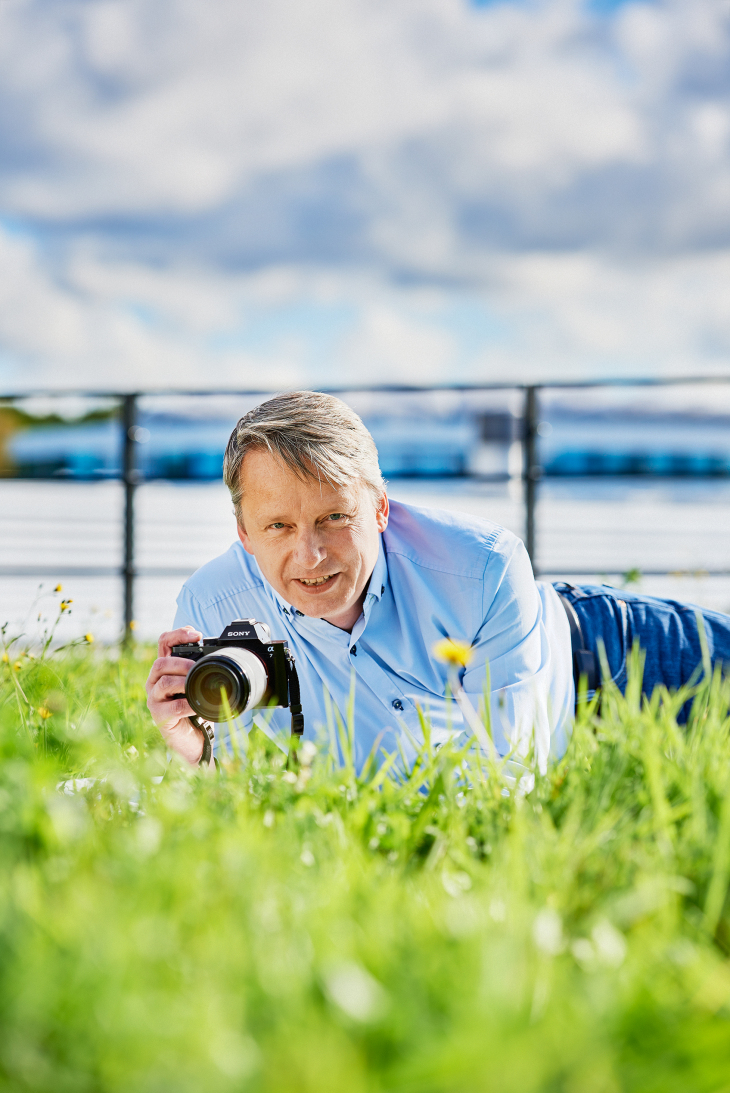 Prof Martin Müller leads the Materials Research Division with its X-ray and neutron instruments, amongst the most modern equipment in the world.

If your knee cramps up or you’ve got a pinch in your back, sooner or later you‘re going to land in the radiologist’s oﬃce. A radiologist can glimpse inside your body without cutting you open.

We, too, have someone akin to a radiologist here at the Hereon. Prof Martin Müller has been acting head of the Materials Research Division since the start of January. His mission is to gain insight. He and his team work with photons and neutrons at the user platform known as the German Engineering Materials Science Centre (GEMS) in order to make what occurs in various solids at the nano-level visible and comprehensible. Why do welded seams bear such heavy loads? Why is wood simultaneously so stable and ductile? Why can ﬁne cracks sometimes occur in cast engine blocks? What precisely happens when hydrogen is stored in metal granules?

“Some of these questions can, of course, also be answered in the laboratory,” Müller explains. “But you need our instruments and methods to observe the inner structures and processes.”

Anyone who comes across Martin Müller could actually take him for a physician. His demeanour is markedly amicable and open. He’s an attentive listener, nodding often and smiling. The 49-year-old’s replies possess a considered eloquence. What changes has he implemented since he took over as institute director? “Initially, we created new structures,” he explains. Four new groups have been created out of one very large department. His institute has also moved to other premises. In Müller‘s oﬃce, the moving boxes are piling up at DESY.

“Come, I’ll show you where we do our measurements,” he says. We head over to PETRA III, the large storage ring, where the three beamlines are located. The Hereon researchers use these X-ray beamlines for their experiments. The radiation with which they work is ﬁve thousand times ﬁner than a human hair. One of Müller’s employees is sitting in the shed with two colleagues from China. The researchers from the Far East collaborate with the Hereon’s Magnesium Innovation Centre (MagIC) under the direction of Prof Karl Ulrich Kainer. At the beamline, they analyse how a certain magnesium alloy behaves when it is stretched. “It’s fascinating,” says one of the researchers from Shanghai. “The measurements tell us what happens in each individual grain of the alloy. We’re learning a great deal from it.” He thinks that the results of this study could be used in concrete applications in the automotive and aerospace industries within only one to two years. There are only four research centres in the world where such an experiment could be undertaken. “The equipment, however, is nowhere as modern as here in Hamburg.”

Müller has ambitious plans for the future of his institute. His biggest aim is to work more closely with the other Hereon institutes:

“I would like for my colleagues in materials, polymer and biomaterials research to utilise our GEMS technology as comfortably as they would the instruments in their own laboratory.”

The lack of proximity is the greatest challenge here: Müller and his team’s primary work is not carried out in Geesthacht. Their X-ray beamlines are located in Hamburg-Bahrenfeld and their neutron instruments are in Garching bei München. In addition, his institute only has 20 per cent of the measurement time at their disposal at DESY. “And we need these days mainly for improving the facilities and expanding our methods,“ says Müller. The remaining 80 per cent is assigned to researchers who apply from all over the world. “Of course, we would also like to continue serving external users as the leading German centre for studying materials using synchrotron radiation and neutrons,” he explains.

For colleagues from the Hereon, there is another type of “backdoor access” to GEMS technology, which can be found just a few meters further into the facility. One of the beamlines hides a small measuring stand. Researchers from Geesthacht are currently testing a sample for hydrogen storage.

“How did you get measurement time?” asks Müller. “We just called,” says his colleague. Müller smiles. „See? It’s relatively uncomplicated to use this side-station for Hereon projects without a laborious application process or having to wait a long time.”

Müller’s fascination for X-ray studies stretches back to his master‘s degree at the University of Kiel, where he still teaches today. What was the most exciting Hereon experiment of the past year for him? Müller thinks it over for a moment:

“We recently watched a piece of equipment machine a metal part in real-time. We were able to make the deformation processes in the material visible using high-energy synchrotron radiation.”

The greatest breakthrough of the last few months for Müller was, however, the results from laser joining a titanium-aluminium alloy. The fact that the welded seams could be improved mechanically lies also in the expertise the researchers gained from using Müller’s X-rays. “This success was only possible because our institute cooperated very closely with the Institute for Materials Mechanics led by Prof Norbert Huber,” Müller points out.

That is how it works everywhere – not only in the research. You want more of what works well. For Müller that means working more closely with other Hereon institutes; more collaborative work on the graduate student level; more Hereon projects and more internships in Garching and at DESY.

When Müller talks about his employees, one phrase always arises: to be “all ears” for the people with whom he works. The man with a perspective at the Hereon also wants to keep his ears to the ground in regards to topics stemming from other institutes. This means collective workshops, talks, seminars – perhaps, informal meetings at DESY or in the Hereon cafeteria in Geesthacht.