Rivers, estuaries, deltas and coastal seas connect more than three quarters of the Earth’s land surface with the oceans. Most of the world’s population lives close to rivers, lakes, estuaries and deltas, as well as along coasts, where many of the world’s megacities are located. Rivers and seas are intrinsically linked through transfers of water, sediment, organisms, nutrients and artificial substances such as pollutants. Everything that happens in the upper part of a river has an impact further downstream and even on the sea into which it flows.

This natural connection between land and ocean is essential for humankind. Humans alter rivers and coastal seas for their benefit, which impacts the environment. However, rivers, estuaries, deltas and coastal seas are still researched and managed largely independently, without consideration of the wider consequences – this is why scientists in Europe no longer want to study rivers and seas separately, but as a continuum, as river-sea systems. An enormous pan-European research infrastructure project bears the name DANUBIUS, in reference to the Latin name Danuvius for the Danube, as that is where the idea germinated.

Dr Jana Friedrich, scientist in the "Aquatic Nutrient Cycles" department at the Hereon Institute of Coastal Research, has been involved from the very beginning. We met her and Dr Adrian Stanica, the coordinator of DANUBIUS-RI, for an interview in Hamburg. 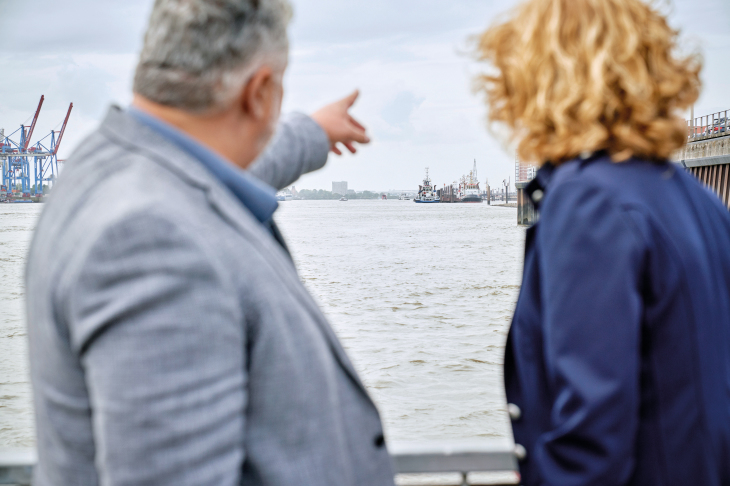 Ms Friedrich, what are the challenges we are facing in river-sea systems?

Jana Friedrich: Climate change as well as industrialisation and urbanisation, energy generation and shipping, agriculture and fisheries create many problems, which are affecting river-sea systems. For example, dams for hydropower generation and drinking water reservoirs, which humans need, are hindering the natural flow not only of water but also of sediments. These are then missing further downstream, leading, for example, to shrinkage of deltas and coastal erosion. The dams are interrupting the connectivity within the river-sea system, making it difficult for fish to migrate. Another problem is the increase in occurrence and magnitude of extreme events like floods, storm surges and droughts, due to climate change. The challenges are to ensure sufficient flow of water and sediment of good quality for humans and nature from the source to the sea, to promote resilience to extreme events and to deal with the multitude of pressures and their interactions. The biggest challenge, however, is to balance human use and protection of river-sea systems.

Infographic: From Source to Sea 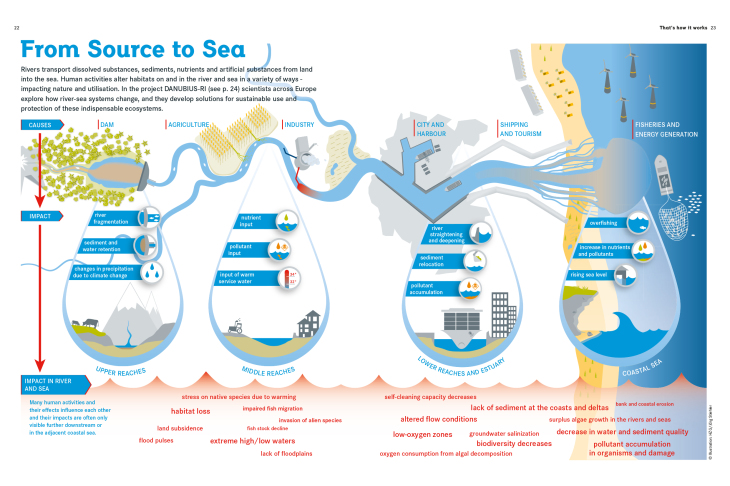 To get to the pdf please click on the graphic

Where did the idea for DANUBIUS come from?

Adrian Stanica: The founder of GeoEcoMar, the research institute in Romania, which I am leading now, had the idea of transforming the Danube Delta into a natural laboratory. The Danube Delta has been a biosphere reserve and a World Heritage Site, but managing it was complicated. It was clear that we needed to manage the river, the delta and the sea together as one system. In 2010, Romania declared it as a top priority to develop a research center. Then we started cooperation with other partners such as Hereon. In 2013, the idea gained the status of flagship project in the EU strategy.

Jana Friedrich: In 2016, DANUBIUS-RI then was included in the roadmap of the European Strategy Forum on Research Infrastructures (ESFRI). This is like a European quality stamp saying Europe needs such a research infrastructure for the coming decades to be at the forefront of science. It opens the door to funding sources that would otherwise not be available.

DANUBIUS brings together not only earth sciences, life sciences, numerical modellers, and engineers, but also social and ecological sciences – why should these different researchers together study river-sea systems?

Adrian Stanica: Scientists have been working either on rivers or on seas. That is why we don’t have a good understanding of river-sea systems from the source to the sea. But whatever you do upstream has an impact further downstream – these activities cannot be separated from one another. Matter, such as sediments and pollutants, is even further transported into the sea. That is why it is important to understand how rivers are affecting the coastal seas. But there are very few research groups around the world connecting freshwater, transitional waters and coastal seas. 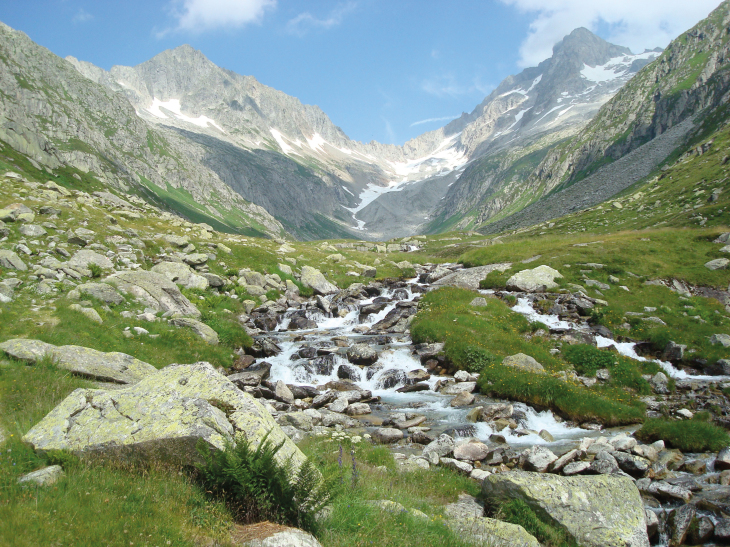 At the spring and in the upper reaches, the water is usually still clean and free of pollutants. Photo: Hereon/ Jana Friedrich

Is it difficult to bring all these various sciences together?

Adrian Stanica: From my point of view, one of the most significant weak points in our scientific communities in Europe and globally is that we don’t listen to each other. Sometimes we use the same word but we understand different things. That is why communication, which also involves listening, is so important, especially in such an interdisciplinary project.

What does research infrastructure mean?

Adrian Stanica: A research infrastructure (RI) is any type of equipment, facility or lab that will provide services and allow scientists to do scientific work, for example, to do experiments. We are building a research infrastructure, which is distributed across different countries in Europe. It’s like a big puzzle – each of these countries has facilities, equipment and expertise needed to observe, analyse, simulate and manage river-sea systems. Some of these facilities are already existing, others have to be built. In the end, we want to put all of these pieces of the puzzle together, which then can be used by interested researchers studying various aspects of river-sea systems. The idea is to establish an infrastructure for future generations to work together. 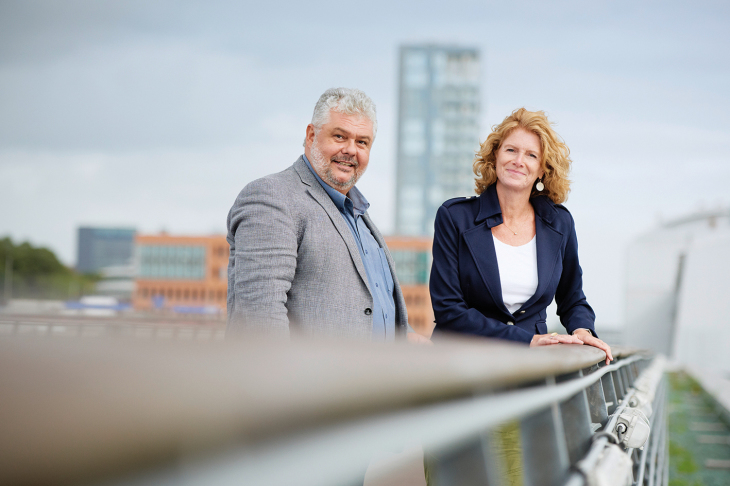 You defined twelve so-called supersites, which are living labs and where you are looking at specific river-sea systems. Jana Friedrich, you are coordinating the Elbe-North Sea Supersite at Hereon. What is so interesting about it?

Jana Friedrich: At the moment, the Elbe-North Sea Supersite encompasses the tidally influenced Elbe estuary, reaching from Geesthacht through Hamburg into the German Bight, as far as the influence of the Elbe goes into the North Sea. On one hand, the Elbe is the lifeline of the region serving the Metropolitan Area of Hamburg, which is economically very important. On the other hand, it is a heavily modified system which makes the Elbe-North Sea Supersite an interesting system to study. For example, continuous dike lines have existed since the 13th century on both banks of the lower river. In addition, the Elbe River is deepened and dredged so that big ships can enter the Port of Hamburg. More than half of the catchment is used for agriculture. The Elbe receives lots of nutrients fuelling algae growth. As a consequence of all this human intervention, the conditions in the river changed completely, leading, for example, to low oxygen and high turbidity in the Hamburg port area and downstream during summer, which has a number of negative implications.

I guess there will be a lot of different data. How can you compare the data?

Adrian Stanica: We will develop and implement the so-called DANUBIUS Commons, a common set of methods and tools, so that data is generated, which can then be compared. This is one of the main challenges between different river-sea systems worldwide.

Can the results from European river-sea systems be transferred to other systems in the rest of the world?

By posing these questions, DANUBIUS-RI addresses the following research topics regarding river-sea systems: climate change and extreme events, quality and quantity of water and sediments, hydromorphology, biodiversity, ecosystems and their services:

After the three years of preparatory phase funding, what have you achieved so far?

Adrian Stanica: I think we are a bit more advanced than I hoped we would be when we started in 2016. For example, we developed DANUBIUS-RI’s architecture and we started working on the DANUBIUS Commons. Hereon and the University of Birmingham led the development of the Science and Innovation Agenda. We also prepared the statutes to apply for status as a legal entity – a European Research Infrastructure Consortium (ERIC). And of course, we started to bring together the community: scientists, stakeholders, representatives of governments.

Jana Friedrich: In addition, Hereon applied already for infrastructural funding to build a research platform in Tesperhude at the Elbe, which will represent the first component of the Elbe-North Sea Supersite. We are extremely glad that the state government of Schleswig-Holstein has recognized the importance and granted our request. We will give our best to get the research platform up and running by 2021. This means one piece of the puzzle will be operational then. 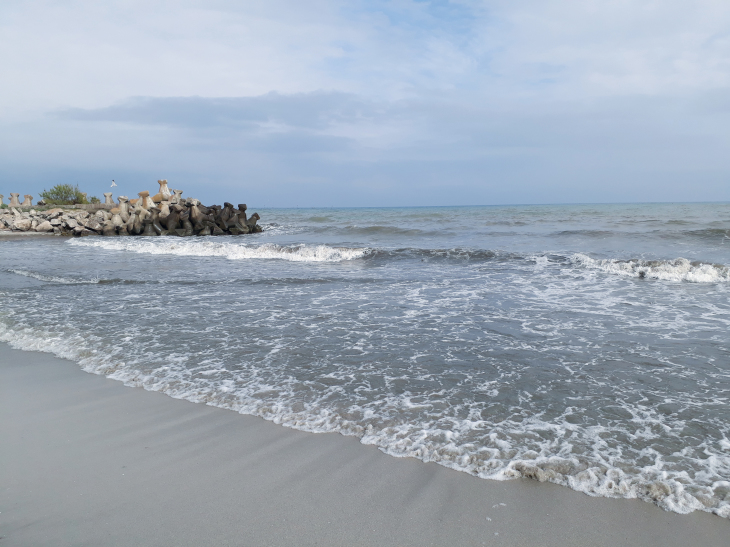 Throughout the entire river-sea system, for example, nutrients from agriculture or pollutants from industry can reach the coastal sea. Photo: Hereon/ Jana Friedrich

What are the next steps after the preparatory phase?

Adrian Stanica: On the European level, we will apply for status as an ERIC legal entity in early 2020, and we will develop the final concept. Whereas on the national level, we need to prepare, establish and connect the pieces of the puzzle, which together will then form DANUBIUS-RI. Some countries and institutions already have their facilities and equipment in place, like our German colleagues at Hereon. Others need to upgrade their existing facilities and equipment. Provided the required funding resources will be in place, DANUBIUS-RI is expected to be operational around 2024. So we have three or four years of warming up and we are really looking forward to that.

Mr Stanica, you are already the director of a research institute in Romania. Additionally, you are coordinating DANUBIUS-RI. What is your personal motivation?

Adrian Stanica: It is part of my life already. I was asked back in 2010 if I am interested. It sounded like mission impossible, so I said: “Let’s do it”. It was and still is a huge challenge but it is an exciting one, bringing people together and trying to find solutions. I like being together with all these great people and experts, who are supporting DANUBIUS-RI. It feels like we are one big family.

Thank you for your time!

The interview was conducted by Gesa Seidel (Hereon).
Published in in2science #9 (April 2020)